A Motorcycle Haven for Veterans with PTSD 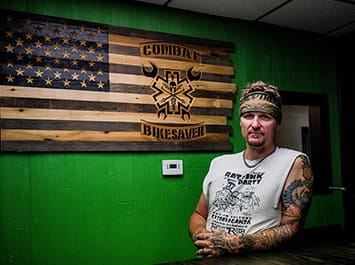 Growing up in a hot rod shop in Southern California, Jason Zaideman was raised on “Rat Fink” bikes. Think medieval motorcycle masterpieces. He built them with his dad, a veteran who served in Vietnam. Out of junk, he made “cool and ready” rides and reveled in his ability to conjure beautiful things out of nothing but spit and grit.

The Beginnings of Operation Combat Bikesaver

Molding that metal alongside his dad, who suffered with Post Traumatic Stress Disorder (PTSD), shaped the person Jason would become, the co-founder of “Operation Combat Bikesaver.” It’s a haven for veterans with PTSD to bond with each other while they build custom motorcycles.

Off of a country road in Crowne Point, Indiana, sits the shop. Today it’s Father’s Day and Jason is taking roll call, checking to see who’s signed in. Propped outside the door is the motorcycle he built to honor his dad. Looking like something from Mad Max, the bike is covered in skulls and inside the gas tank are his dad’s ashes.

No doubt that Jason’s dad would have felt right at home in the shop his son built. The atmosphere is jovial, but at the same time the veterans are serious about their work of creating awe-inspiring custom-built motorcycles that look like extensions of their souls.  One of the veterans has coated the gas tank of his Harley-Davidson® motorcycle with a glorious American flag made of leather. The companion star-spangled fender is glistening under the morning light flooding through the Army green garage door.

As an Army engineer who served from 1996-2004, Jason never saw conflict, but he understands how difficult it is for veterans to acclimate to civilian life when they come home—especially when they are dealing with the added challenge of a PTSD diagnosis. According to the Department of Veterans Affairs, the number of Veterans with PTSD varies by service era:

Jason’s aim is to keep the veterans’ spirits up and to keep their minds occupied, which isn’t difficult when there’s plenty of inspiring work to engage in. Since Jason grew up in a shop that focused on making custom work for businesses and people, he understands how to collaborate with a veteran to help him form the story he wants to tell through the motorcycle. It takes veterans a full year from blueprint to completion. Not only do the veterans need to come up with a cohesive design, but they have to learn how to use the machines to get there. And it’s not just welders and grinders, the veterans use CAD design technology and 3D printers to fashion the pieces they need.

“At first, there’s a learning curve,” said Jason. “You want to make it look like a piece of art, not just thrown together.”

The men encounter challenges along the way such as difficulty executing their designs. For example, one veteran’s exhaust pipe design was bumping into the floorboards and hitting the engine case. Overcoming challenges like that is part of the process of empowering the veterans with the confidence to know that they can do anything they set their minds to.

According to Jason, the program is bringing veterans to life. Not only because they can experience the transcendent state of creation, but also because they get to create along with their fellow veterans. For the men who struggle to transition back to civilian life after experiencing the trauma of combat, Operation Combat Bikesaver feels like home.

Finding the MIA: Meet the Military Bringing Home Our Vets
Sailor Jerry, The Rowdiest Rider of Them All, Lives On
How a Harley-Davidson® dealership builds community
The Story Behind the Iconic Harley-Davidson "Hill Climber" Monument 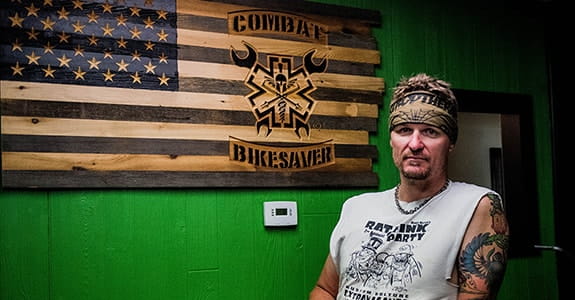