Sailor Jerry, The Rowdiest Rider of Them All, Lives On 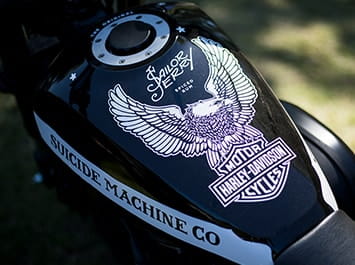 Veterans will tell you that war has a way of changing you. It drives you to do things you wouldn’t otherwise do. For some, one of those things was getting a tattoo.

For sailors and marines stationed in Honolulu, HI during WWII, getting a tattoo was a rite of passage. If Norman Collins, AKA, “Sailor Jerry,” didn’t give you the tattoo, chances are he influenced the guy who did.

Who is Sailor Jerry?

Sailor Jerry was the mastermind of many of the tattoos you see on bikers and members of the military. Think images of brightly colored, densely outlined American eagles, pinup girls and skull and crossbones.

What Influenced his Tattoo Design?

When he was stationed as an American sailor in Hawaii where he would stumble into owning his own tattoo shop, Sailor Jerry became heavily influenced by Japanese art. His tattoo designs were complex and detail oriented. He used bold lines. He employed brave design. He blew away his competition.

Sailor Jerry’s big personality was notorious. He spoke his mind. He was wildly creative and a true free spirit. A prankster who was fiercely competitive, he gave other tattoo artists bad advice to throw them off their game. And, as legend has it, his invention of purple ink so shocked his arch nemesis, Lou Normand, he ended up in the hospital.

What Do Sailor Jerry’s Tattoos Embody?

When WWII was over, sailors and marines traded the open sea for the open road, and they brought their Sailor Jerry tattoos with them. Sailor Jerry became the symbolic embodiment of the trinity between motorcycles, tattoos and the military. Even though he is no longer with us, his work lives on in the tattoos he left behind and the army of tattoo artists he inspired.

The “My Work Speaks for Itself” Contest


The winners have been chosen and congratulations are in order for:

After these beautiful designs are applied onto six Street Bob® motorcycles, the bikes will make their paces this summer at various events being held around the country. Then, they will be available for you to win. Check back here for updates on how to enter the contest. After the Harley-Davidson® 115th birthday celebration, each motorcycle will be awarded to the lucky winners through a separate fan-driven sweepstakes, letting the artwork live on infinitely, like Sailor Jerry. 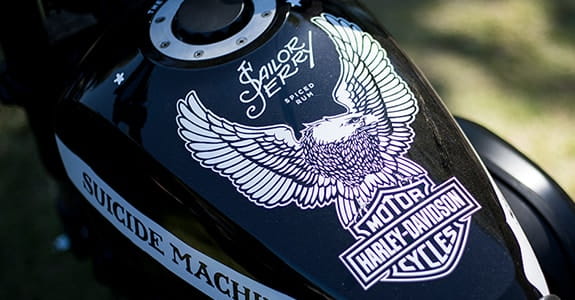