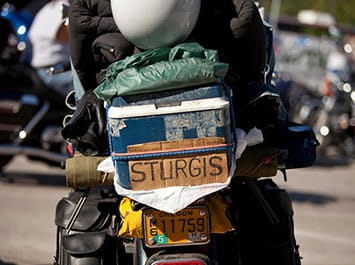 Riding a motorcycle has always been an exhilarating way to see a new place, but that’s only part of the story: motorcycles also bring out the best in people. In the small town of Sturgis, South Dakota, that spirit is taken to the next level, with the annual Sturgis Motorcycle Rally, which draws crowds of bikers and non-bikers from around the world.

Sturgis is a biker’s equivalent to the Grand Canyon: it’s the one destination that almost every motorcyclist wants to ride to at some point in their lives. To be honest, it’s kind of like the Beatles, Elvis and the Grand Canyon all rolled into one. It’s the ultimate destination for motorcycle enthusiasts.

Sturgis is a city in Meade County, South Dakota, United States. The population was 6,639 at the 2010 census. It is the county seat of Meade County and is named after General Samuel D. Sturgis.

The Sturgis Motorcycle Rally is not just a biker rally, but a regional celebration. It draws over 500,000 people to the small town of Sturgis each year. The event makes the town the fourth largest city in the state and has grown to be more than a two-week event.

What is the history of Sturgis?

Some of the popular activities include fantastic live music, live entertainment, numerous spectator competitions (drag racing, ATV racing, etc.), and of course, a large number of vendors and concessions.

The first “rally” was staged on August 14, 1938. Known as the Black Hills Motor Classic, it began as a race, featuring nine participants and a small audience. Then everyone had a beer and went home.

2021 marks the 81st rally. Organizing is already underway, with Kid Rock named as the first musician to be performing at Sturgis. You can already start making reservations at campgrounds and RV parks, private rental homes, hotels, motels, and inns.

In 2021, South Dakota will become the 49th state to receive a Gold Star Families Memorial Monument. It will be in Sturgis, near the Black Hills National Cemetery. The project will cost $48,000, and ground-breaking is expected to take place mid-year 2021.

Fifty-two miles is roughly the number of miles from the famed Sturgis Buffalo Chip to Mount Rushmore National Park. This is one of the many great ride maps you can use for an exciting day trip or give the Harley-Davidson® Ride Planner a try.

Other routes will take you to the Devil's Tower, Spearfish Canyon, Needles and Crazy Horse Memorial, and Bear Butte and the Badlands.

1878 is the year Sturgis was founded. Back then, it was called Scooptown because many of the town's inhabitants "scooped up" their salaries from nearby Fort Meade.

The Devil's Tower was the first United States National Monument. President Teddy Roosevelt designated it in September 1906. The monument takes up a collective 1,347 acres. About 400,000 people visit Devils Tower, and 1% climb it, mostly with traditional climbing methods.

The tower is 867 feet from the summit to the base. Famously, the Tower played a pivotal role in and was the climax of the 1977 Steven Spielberg film Close Encounters of the Third Kind.

The Tower is a one hour and 15-minute ride away for those looking to extend their Sturgis adventure.

1803 was the year that the United States annexed the area that is now South Dakota because of the Louisiana Purchase. Before then, the Spanish had claimed the land as their own in 1762, following the French, who had explored the area in the 1740s.

The original inhabitants of the area were the Lakota Indians, who were displaced by Europeans and later Americans.

The estimated amount of money brought into Sturgis each year by Rally attendees, according to South Dakota’s Department of Tourism.

If you want to get married at the Sturgis Motorcycle Rally, all you need is $40 in cash or traveler's checks and ID. And, of course, both applicants must be present. So, if you’re riding two-up on your way to Sturgis, here are some safety tips for riding with a passenger.

The speed limit around the outskirts of town near attractions like the Full Throttle and Buffalo Chip can be 35-MPH. With congestion from the rally, those speeds can be even lower, so make sure you’re comfortable riding at low speeds.

You can have a commemorative brick placed in Sturgis as part of the Sturgis Brick Project. A 4" by 8" brick with four lines of text and a maximum of 20 characters per line costs $105, and an 8" by 8" brick with a max of 7 lines of text and 20 characters max per line costs $180. Act fast because these bricks are running low! New ones are installed bi-annually,

Make your calendars now because if you can’t make the Rally in 2021, there’s always the rally in 2022. 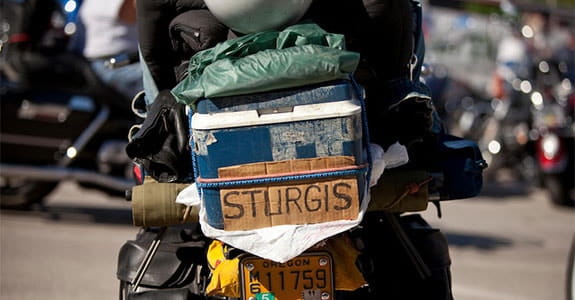