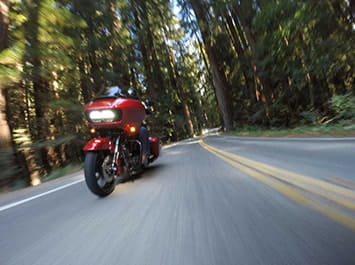 With its epic mountains, lush greenery, and vast oceans, the Pacific Northwest was a majestic motorcycle training ground for Angela Stewart, the head of market operations for the West Coast region of Harley-Davidson.

“Whatever toys you could dust off and turn on—boats, snowmobiles, three-wheelers, dirt bikes—you name it, we rode it,” said Stewart about her experience growing up in the country as the only girl in a family of boys.

She recounts the time when her uncle plopped her on a mini-motorcycle when she couldn’t yet touch the ground, twisted the throttle, and yelled: “Don’t stop or you’ll fall down.”

Decades later, Stewart is still riding. Although in college, she traded the dirt under her feet for the street. A former boyfriend introduced her to the Harley-Davidson® Sportster®, which is similar in size and style to a dirt bike, and she’s never looked back.

“While the Sportster® felt like home to me,” said Stewart, who’s worked for Harley-Davidson for almost 20 years, “I couldn’t get over what a different experience it was to ride a street bike versus a dirt bike. I was hooked.”

She put 5,000 miles on the motorcycle right out of the gate that first summer, and her riding habit lives on.

True to her roots of operating all sorts of vehicles, Stewart revels in the versatility of the sport, riding an array of motorcycles over the course of the years. She enjoys each type of bike—Sportster, Softail, Dyna, bagger—for different reasons.

Riding a motorcycle is a moving meditation

Stewart has banked thousands of miles riding in the United States, from Phoenix to Omaha, Nebraska, up and down the East Coast from Nashville, Tennessee, to Gettysburg, Pennsylvania, and across the Sierra Nevadas. She admits she favors cruising the Pacific Coast Highway.

“I can gauge how stressed I’ve been by how many miles it takes for my mind to stop on one of my long rides,” she said.

Working for Harley-Davidson, she’s proud of the innovation the manufacturer has put into providing riders with a range of options for storage to make those overnight trips more extensive and enjoyable.

“Whether you’re going for a short jaunt or an epic journey, Harley-Davidson® has a storage option for you,” said Stewart.

Stewart feels that Harley-Davidson® motorcycles provide a valuable service that Americans desperately need right now, which is a means to disconnect from our overstimulated environments to reduce stress and to increase our connection to the present moment.

“My mom gave me a pillow that says, ‘You never see a motorcycle parked outside of a psychiatrist’s office’,” Stewart said.

Long rides give Stewart an opportunity to be aware of the world, noticing the changes in temperature and elevation as she traverses different terrains. She likens riding a motorcycle to meditation in motion and couldn’t imagine life without it.

Advice for women entering the sport

As more and more women enter the sport, Stewart advises women who are interested in riding for the first time to take the Harley-Davidson® New Rider Course and to find the right bike for them. Stewart says her sister-in-law, who is new to the sport, started out with a two-wheeled bike but soon realized the three-wheeled trike was made for her.

“Finding the right bike for you makes all the difference in whether you stay in the sport for the long haul,” said Stewart.

But for Stewart, who grew up in the country riding all sorts of machines in the majestic Pacific Northwest, any Harley-Davidson® will do. Next up for her? The Harley-Davidson® LiveWire® model. 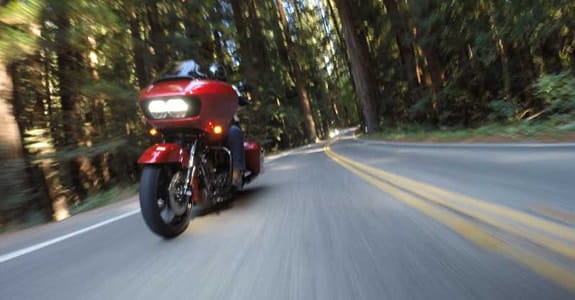