Two things fueled Bessie Stringfield’s riveting life on the open road: “the man upstairs” and the power of 27 Harley-Davidsons®.

Badass isn’t quite the right word to describe Stringfield, according to her biographer, Ann Ferrar. Yes, she was strong. Long before the Civil Rights Act was signed into law, she was the first black woman to ever ride a motorcycle across the country. And, yes, she crisscrossed the country while riding, owning, and maintaining 27 Harley-Davidson® motorcycles during her storied career. “But, she wasn’t looking for trouble, nor did she have a chip on her shoulder. She was much more thoughtful than that,” says Ferrar on her website.

To know Stringfield is to know she believed God was responsible for everything that happened. It was her unshakeable faith in a higher power and her complete confidence in her motorcycle skills that carried her on a riding adventure that would earn her a place in the American Motorcyclist Association (AMA) Motorcycle Hall of Fame. To support herself, she made money performing motorcycle stunts at carnivals and served on a civilian motorcycle squad for the government during World War II. She kept pace with the platoon of men during fierce training exercises to win what she considered a dream job. Even though her life was the stuff legends are made of, she largely remains a hidden legend.

Banking the miles she put on her fleet of bikes and making the repairs is impressive enough, but she accomplished this feat as she dodged the dangers of being a black woman in the South during the Jim Crow era. You can see why people want to call her a badass, but rebel is a better word. Despite all the odds stacked against her and the oppressive forces bearing down on her, she reveled in her freedom. Nothing could stop her from living the life on the road she was meant to have.

Riding on the wings of destiny

Driven by a fervent belief in God, Stringfield seems to have been preordained to ride a motorcycle as evidenced by her dreams. In the graphic novel about her journey, “Tales of the Talented Tenth,” the author sits down with Stringfield shortly before she passed away. She tells him about being orphaned as a little girl, adopted by an Irish woman, and dreaming about “falling in undefined darkness.” When she was a teenager, her reoccurring dream of formlessness transformed into images of herself riding a motorcycle and feeling elated with freedom.

Her mother answered her prayers for a motorcycle, but how she jumped on the bike and intuited how to ride without a lesson remains a mystery. She most certainly would credit Jesus with her natural ability. Burning to break free and see everything she could see, at the age of 19, she set off on a life-long riding adventure.

Reveling in the ride despite the risks

She started by tooling around the New England states until she started throwing a penny on a map and taking off for the place wherever it landed. After she tired of tossing pennies, she charted a course for the South. Despite the risks she would face as a woman of color, she ventured to Virginia after she was bequeathed the “Green Book” by one of her six husbands (the one whose name she kept), which contained a list of safe places for black people to sleep.

According to an article about Stringfield in the Consumers Advocate, “Stringfield spent many nights staying with black families she met on her travels. Other evenings were passed parked at a filling station and sleeping atop her bike. These aspects of Jim Crow America were almost benign compared to the more serious dangers of being black and far from home in a white world. In the 1930s, 119 African Americans were lynched. Hundreds of others were beaten, tortured, raped, and humiliated. The protection of the law was uncertain and inconsistent, to say the least.”

Stringfield died in 1992 at the age of 82. She rode her Harley® motorcycle to church every Sunday until shortly before her death. Recognizing that it had neglected to write about her death when it occurred, The New York Times belatedly published an obituary in 2018. In 2000, the AMA Hall of Fame created the Bessie Stringfield Award to honor "an individual who has been instrumental in bringing emerging markets into the world of motorcycling.” Two years later, the AMA inducted her into its Hall of Fame.

Stringfield lived life with an unbridled sense of adventure, an uplifting spirit, and relentless faith. She was the embodiment of grit, grace, and gravitas. But, despite Stringfield’s remarkable life on the road, she’s not a household name, although her recognition is rising. As more women enter the sport, the more Stringfield’s stature grows. Just as you couldn’t contain Stringfield’s boundless spirit, you can’t suppress her incredible story. Her compelling life of adventure, freedom, and bravery commands attention. 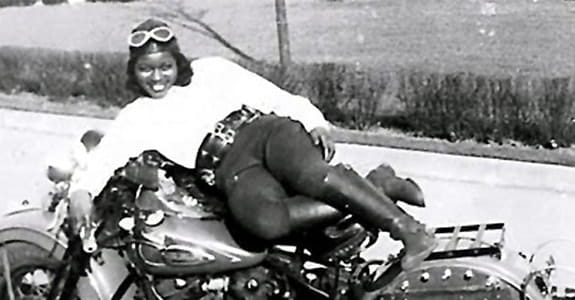