Cal Rayborn in Pursuit of the Land Speed Record 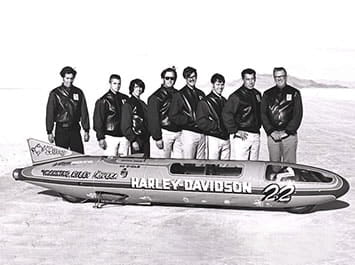 Since the invention of the motorcycle, riders, engineers and manufacturers have been united in pursuit of speed.

From Glenn Curtiss’s 64 mph in 1903 to the current record of 376.363 mph, the motorcycle land speed record has a long history. Harley-Davidson has made its own mark on this history, and one notable example is Cal Rayborn’s 1970 record set with a single-engine Sportster™ Streamliner.

Cal Rayborn began riding motorcycles when he was just eight years old, and by sixteen was participating in scrambles in San Diego. Self-described as “wild and woolly,” Rayborn frequently crashed.

His first professional road race, held in Riverside, California in 1958, nearly ended in tragedy as Rayborn and another rider, while trying to beat each other at a turn, hit a bank on the side of the road and were thrown into the air. With a broken foot and back, Rayborn spent six months in casts.

Rayborn’s career was marked by impressive speed, daring and determination.

He set a new record to win the 100-Mile National Championship Road Race in Loudon, New Hampshire in 1968, beating the former record of 26:01 by five minutes.

Following a crash at Ascot Park in 1966, with a cast on his leg and doctor’s orders not to race again for a month, Rayborn cut the cast off himself and won a race at Carlsbad the next weekend. A year later at Carlsbad, he crashed while leading, but re-entered the race and finished without brakes.

From 1966 to 1970, the motorcycle land speed record was held by Bob Leppan. To beat his 245.667 mph record, engineers Dennis Manning and Warner Riley created a 16 foot streamliner powered by a single Harley-Davidson® Sportster® engine.

The streamliner chassis was designed and built by Manning, while Riley prepared the engine, modified to an 89 cubic inch displacement running on a fuel mixture supplied by George Smith of Viola, Wisconsin. The engine was mounted directly in front of the rear wheel, with a chain drive.

To fit in the streamliner, Rayborn rode nearly horizontal. With the front tire ahead of him, his forward vision was minimal, and Rayborn used clear plastic panels on either side of the wheel to watch the black stripes marking the edges of the track.

Small, pneumatically operated skids in front of the rear wheel kept the streamliner balanced while stationary and at low speeds – “low” being 100 mph! Rayborn retracted them as the streamliner picked up speed and extended them as the bike slowed after the run, leaning to the side to ‘feel for the skid’.

After one early run the skid failed to fully extend, and when Rayborn leaned to find the skid it dug into the salt. The rear wheel lifted, and the streamliner was thrown into a series of barrel rolls at around 100 mph. Rayborn was fortunately uninjured, and back in the cockpit for another practice run after the crew worked through the night and the next day to repair the damage.

By the time Rayborn took his official turn on the salt flats, there was a new record to beat. Just a couple weeks earlier, Don Vesco had become the first motorcyclist with a successful run over 250 mph, setting a record of 251.924 mph with a double engine Yamaha streamliner.

Undaunted, Rayborn took to the salt on October 15, and set a new world record of 255.380 mph. But even this was not enough for Rayborn, and the team returned the next day for another try.

One of the Greatest Road Racers in History

Don Vesco topped the record in 1974 with a speed of 281.702 mph. Tragically, Rayborn would never get the chance to reclaim the title. In December 1973, Cal Rayborn was killed during a race in New Zealand, when a borrowed Suzuki seized and he was thrown into a wall during a turn.

Rayborn’s death was a shocking loss for the motorcycling community, and he is remembered as one of the greatest road racers in the sport’s history. 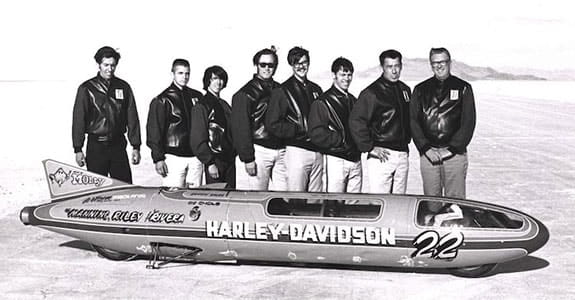