300
False
500
500
Get a free quote
Save on your Insurance
Start my quote
MOTORCYCLE INSURANCE QUOTE
Protect your bike now, with the coverages you want.
contents of this are filled by ValidateForm()
Call Us
is invalid, please correct.
is required.
Retrieve Saved Quote Make a Payment
Back to The Open Road

History of the Men Who Founded Harley-Davidson 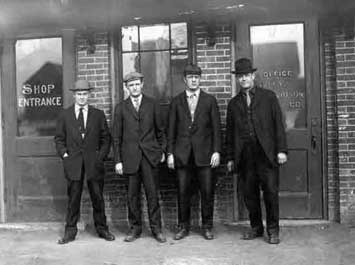 You might think that Harley-Davidson was founded by two guys whose last names were Harley and Davidson, and you would be partway right.

It's actually one Harley and three Davidsons, and it took all four of them working together to create a brand that would revolutionize transportation and America.

When was Harley-Davidson officially founded?

Harley-Davidson was founded in 1903 in Milwaukee, WI and officially incorporated in 1907 with Walter Davidson acting as the first president. Arthur Davidson became the first general sales manager and the secretary while William Davidson was the first works manager. William Harley, meanwhile, became the chief engineer and treasurer.

Given the ratio of three Davidsons to one Harley, you may be wondering why the company wasn't called Davidson-Harley. Since the original idea for the motorcycle came from William Harley, the gang thought it was only fair to have his name first.


Who were the four founders of Harley-Davidson?

William Harley was only a year older than Arthur Davidson. The two boys grew up just a couple houses apart in Milwaukee, Wisconsin. Such was the start of their lifelong friendship.

Both boys were enamored with bicycles. William even took a job at a Milwaukee-based bicycle factory when he was 15, rising from the rank of cycle fitter to drafter, which led him to work as a draftsman at the Barth Manufacturing Company. It was there that he designed his first internal combustion engine. It was based on the French de Dion-Bouton engine, which would go on to be used by many early motorcycle manufacturers.

Along with Arthur, another draftsman from Barth, and a friend whose father owned a lathe, William and his cohorts would spend the next several years working on a proto motorcycle in their spare time. The prototype fizzled out, but it proved to be invaluable because it made William and Arthur realize that what they needed was a machinist.

The two reached out to Arthur's older brother Walter, who was living in Parsons, Kansas at the time. Walter arrived expecting to see a motorcycle but instead was greeted by an unfinished mess. But in that mess, Walter saw a dream, so he decided to stay in Milwaukee to make William and Arthur's dream a reality.

Soon, the trio was joined by another mechanic, William Davidson, Arthur's eldest brother. By 1904, a second prototype was completed. It was the first-ever Harley-Davidson® motorcycle to participate in a motorcycle race. And while it didn't win, the team was already off and running to make motorcycle history!

William was the first chief engineer and treasurer of Harley-Davidson. The idea for the motorcycle was his, although he certainly couldn't have done it without the Davidson brothers.

Engineering ran in the Harley family. William Harley Sr. was a railway engineer who, along with his wife Mary Smith, emigrated to the United States in 1860 from England. William Jr. was born 20 years later in 1880.

When not working on prototypes of the original motorcycle, Harley was pursuing a degree in mechanical engineering from the University of Wisconsin-Madison, which he earned in 1907.

Harley first began tinkering with the idea of a motorcycle while working at Barth Manufacturing Company. Throughout the years, he would build on the successes of his previous models. When the first models were completed in 1903 with a buckle crank, Harley was already trying to figure out how to create a two-cylinder engine, which he did by 1909.

Harley would remain the company's chief engineer and treasurer until his death. He was an indispensable facet of the company's success and crucial in the development and introduction of new bikes. An avid racer, he also had the pleasure of testing his latest creations.

In 1910, Harley married Anna Jachthuber, with whom he has three children: Ann Mary, William J., and John.

Harley was inducted into the Motorcycle Hall of Fame in 1998. In 2003, a Harley-Davidson® statue was unveiled in Littleport, Cambridgeshire, where Harley's father had been born.

Arthur was the youngest Davidson brother, born in Milwaukee, Wisconsin on February 11, 1881.

Arthur developed a friendship with Walter Harley as a child. The two would fish together and shared an interest in biking.

Arthur Davidson was the first general sales manager and secretary of Harley-Davidson. Davidson successfully got the USPS, police departments, and the military to use Harley-Davidson® bikes. He also started a Harley-Davidson® service school that was responsible for training qualified mechanics.

Davidson saw the value in a coalition of industry insiders and riders working toward the common end of advancing motorcycling. Davidson was inspired to align himself closely with and support the American Motorcyclist Association.

At the age of 69, Davidson was killed in a car crash just three miles south of his home. The accident claimed the lives of Davidson's wife Clara, and their friends Dorothy and Donald Jeffery. The Davidsons were survived by their three children, Margaret, Arthur Jr., and James Davidson.

Arthur was not only instrumental in building the first Harley-Davidson® bikes and founding the company but was also mostly responsible for enshrining the brand's place in American history and popular culture.

William "Bill" Davidson was born in Milwaukee, along with his brothers Arthur and Walter.

Bill quit his job with the Milwaukee Road railroad to join the crew that would soon become Harley-Davidson®. It was quite the risk considering how well paying his job was!

Once the original foursome incorporated Harley-Davidson, Bill became the works manager. His responsibilities were to buy the presses and other tools necessary for the manufacturing process.

Throughout his tenure, Bill would keep in close contact with factory employees. They were his eyes on the ground, keeping him abreast of everything necessary to keep the factory running smoothly.

Bill died at the age of 66 on April 21, 1937. His son William G. Davidson would go on to serve as President of Harley-Davidson, as would Bill's grandson John.

In addition to his position within the company, Bill was known for his charity and generosity. During the Christmas season, he would make care packages for strangers. He was also known for his amiable disposition, which extended to everyone from machinists to politicians.

As a child, Walter raced and repaired bikes. As a teen, he taught himself how to be an electrician and was even known to make his own batteries.

After being called to Milwaukee from Kansas to work on the first motorcycle, Walter became an indispensable part of what would eventually become Harley-Davidson. He joined his brother Arthur and William Harley in finishing the first batch of bikes sold to the public. Walter, it turned out, was responsible for building the first bike.

When Harley-Davidson incorporated in 1907, Walter became the first President and General Manager. He spent the rest of his life working for Harley-Davidson® including delivering speeches to stockholders.

Walter also became a motorcycle enthusiast and won several races as a rider, including the 1908 Federation of American Motorcyclists endurance run in the Catskill Mountains. It was an accomplishment that provided a great deal of press for the motorcycle company!

Walter married his wife Emma in 1910. Together they raised three sons:  Gordon, Walter Jr., and Robert. Walter died on February 7, 1942 while still President of Harley-Davidson.

To this day, no one has been President or CEO of Harley-Davidson for as long as Walter.

Where was the first Harley factory?

The first Harley-Davidson factory was a wooden shed in the Davidson's backyard. The current headquarters stands in the same location - in a more prominent building, of course.

Who developed the two-cylinder engine innovation?

The first three motorcycles produced by Harley-Davidson in 1903 all had a buckle crank, a single-cylinder engine, pedals, and a leather drive belt. You would pedal until enough engine compression was built up, at which point the engine took over.

Harley, however, wanted to take bikes to the next level, which meant a two-cylinder engine. Perfected by 1909, the engine, called a V-Twin, could reach speeds as high as 60 mph.

How was the Harley-Davidson culture cultivated?

To stir up the press, Harley-Davidson sponsored "The Wrecking Crew", a racing team known for their exhilarating performances. Today it is commonplace for a motorcycle company to sponsor a team, but when Harley-Davidson did it, the move was revolutionary.

The plan was a success, generating plenty of news and sales. Wisely, the company re-invested most of its profits into improving their products.

Arthur Davidson saw opportunity wherever he looked. By 1914 he had the USPS using 4,800 bikes to deliver mail. Soon, the military was using Harley® motorcycles as well. By the 1950s, police departments nationwide were also using a Harley-Davidson®.

Many motorcycle cops would use boots, breaches, and saddlebags, which achieved a "Wild West" look, which captured the imagination of young boys and the general public.

Seeing a further opportunity, Walter Davidson decided to start marketing the Harley-Davidson® brand using clothing and accessories. Since then, the company has expanded into motorcycle insurance, a riding academy (for both new and skilled riders), credit cards, and more.

Who is Harley owned by today?

Harley-Davidson was born out of boyhood friendship and grew into a globally recognized brand that changed the face of transportation and American culture. It goes to show you that with a dream, a team, and hard work, great things are possible! 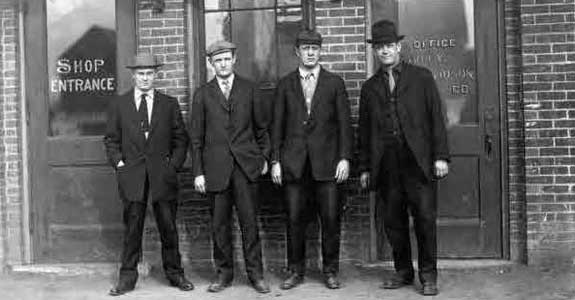