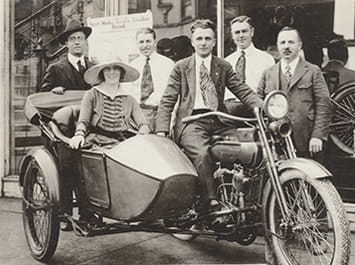 Gertrude Hoffmann was a world-famous Vaudevillian entertainer. A bold character who gained notoriety for her risqué dance performances as Salome in the early 1900s—for which she earned the distinction of having her name become both a verb (doing a “Gertrude Hoffmann”) and a noun (stripping down to one’s “Gertrude Hoffmanns”)—she went on to become an astute businesswoman and one of the first female dance directors and choreographers in Vaudeville and Broadway.

She was also something of an influencer, her name and likeness being used to promote products like Adam’s California Fruit Gum and Harley-Davidson motorcycles.

Gertrude and fifty performers headlined the Milwaukee Motorcycle Club benefit night at the Majestic Theatre in 1915. Whether that performance introduced Gertrude to Harley-Davidson can only be speculated, but four years later she is photographed purchasing a 1920 J Twin cylinder model and sidecar from C. H. Lang in Chicago.

The image was picked up and re-used in newspapers and motorcycle publications across North America. Gertrude was on tour and local dealerships took advantage of the notoriety: When Gertrude’s show appeared in their towns, many dealers used the opportunity to draw a connection with the famed entertainer through newspaper advertising.

Gertrude and her husband, Max Hoffmann, were often reported to enjoy sightseeing via a motorcycle and sidecar. Although most visual media places her in the sidecar, a tale of misadventure made headlines in 1920 when Gertrude rode off, without telling anyone, to investigate the rough-and-tumble town of Burkburnett, Texas. While there, she was stopped by an officer who believed she had stolen the motorcycle. Gertrude had to prove her identity and ownership of the bike—a task that involved reviewing her personal correspondence and a phone call to a dealer in Fort Worth—before getting back on the road to Wichita Falls, where she had a matinee performance that afternoon.

Perhaps capitalizing on the media during her tour, but undoubtedly taking advantage of her fame, Harley-Davidson used Gertrude Hoffmann in a dealer-customizable print ad—one of three similar ads for the 1920 opposed-twin Sport Model. Notably, this was the first motorcycle Harley-Davidson marketed directly, though not exclusively, to women. 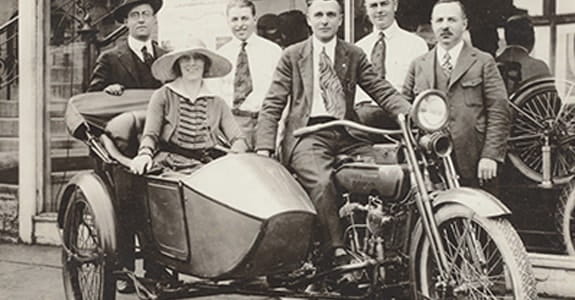