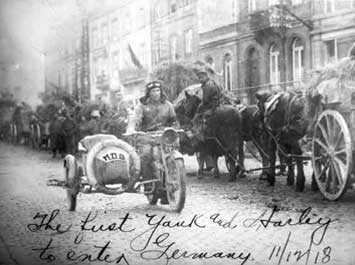 Before Veterans Day was Veterans Day, it was actually Armistice Day, a day to recognize the official ceasefire of WWI.

“To us in America, the reflections of Armistice Day will be filled with solemn pride in the heroism of those who died in the country’s service and with gratitude for the victory, both because of the thing from which it has freed us and because of the opportunity it has given America to show her sympathy with peace and justice in the councils of the nations…"

After WWII ended, President Dwight D. Eisenhower signed this proclamation to broaden the scope of the holiday to encompass both world wars. He replaced “Armistice” with “Veterans”, and Armistice Day became the Veterans Day we know now.

According to the Department of Veterans Affairs, “the restoration of the observance of Veterans Day to November 11 not only preserves the historical significance of the date, but helps focus attention on the important purpose of Veterans Day: A celebration to honor America's veterans for their patriotism, love of country, and willingness to serve and sacrifice for the common good.”

Armistice Day is often overlooked in the United States, but its centennial anniversary is worth taking note of. To celebrate, we’re shining a light on Harley-Davidson’s first military model: the J Series. Harley-Davidson produced thousands of J bikes for the war effort and even provided training schools for military mechanics that still exist today.

Anatomy of a Harley-Davidson® J motorcycle

The J model Harley-Davidson built for the military was different than the civilian model in the following ways:

From the Mexican desert to the cobblestoned streets of Germany

Legend has it that General John “Black Jack” Pershing, famous for his WWI victories, used a small fleet of Harley-Davidson® motorcycles to chase American revolutionary Pancho Villa around the Mexican desert on the heels of the Mexican Revolution. Villa escaped Pershing’s grasp, but the motorcycle was the silver lining of steel in an otherwise gloomy cloud for Pershing.

The motorcycle’s performance had lived up to his expectations, proving itself a valuable asset in maneuver-style warfare with its flexibility as he had envisioned. The motorcycle was armed with machine guns and served as ambulance, dispatch, and transporter.

Thanks to Pershing, the J Series rode on into the battlefields of WWI and made history yet again.

Riding Free for the First Time Across Germany

Rumors were swirling the war was wrapping up when Roy Holtz, a corporal in the US Army during WWI, was sent on a foolish mission in the middle of the night on his trusted H-D® J model.

Holtz’s senior ranking offer insisted he steer them right into the hands of the enemy. He knew it was dangerous, but he knocked on the door for directions as he was ordered to do. On the other side were German officers. He was captured.

The good news is that Holtz was only imprisoned for three days before the war ended, and he was set free. Upon his release, Holtz became the first American to enter Germany after WWI ended, and he did so riding his beloved Harley-Davidson® J motorcycle. His experience gives a whole new meaning to freedom on two wheels.

Proud to say “thank you” to our military and veterans with a discount.

Harley-Davidson and the military have a long history together, and that’s why we’re proud to offer our discount for Harley Davidson® Insurance to active military and veterans. It’s our way of saying “thank you” to those who serve in all wars. 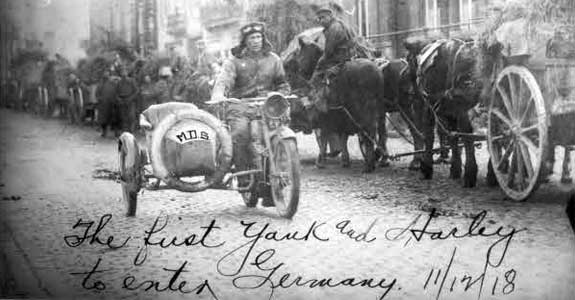