On Sept. 6, 1920, Harley-Davidson racer Ray Weishaar was photographed offering a Coke to a piglet. Now, 100 years later, it’s one of the most recognized photos of Harley-Davidson history and is often cited as the source of H-D’s most enduring animal association.

But that lucky piglet wasn’t the only mascot in the Wrecking Crew’s illustrious history — he wasn’t even Weishaar’s only mascot!

Check out some of the photogenic animal pals from the Wrecking Crew era found in the Harley-Davidson archives.

We don’t know the name of the pup, or the owner, but this image is the first racing team mascot we’ve found. In this advertisement, Roy Artley, Leslie “Red” Parkhurst, Joe Wolter and Otto Walker pose after the Easter Sunday 300-mile race at Venice, California in 1915.

Walker won the event, and it was the first national race win for the company.

Following his win at the Topeka, Kansas races in May 1915, Ray Weishaar shares the spotlight with an H-D outfitted pup. With a white facial stripe and a white front right leg, it seems possible this is the same dog pictured at the Venice race.

Weishaar attributed his additional wins at Goodland and Norton—Kansas races the week prior—to the canine mascot.

At one of the most prestigious races of the era, the Dodge City 300, a dog joins the line alongside Bill Ottaway (team manager), racers Maldwyn Jones, Ralph Hepburn, Fred Ludlow, Otto Walker, Ray Weishaar, Jim Davis and pitman Hank Syversten.

Blending in with his jersey, Weishaar holds a barely-visible coyote named Bambino. This mascot was a possible nod to the Dodge City race’s nickname, the Coyote Classic. Jim Davis won the event held on July 5, 1920.

Ray Weishaar won the second-annual Cornfield Classic on Sept. 6, 1920. During the week prior, while the team practiced and prepared for the Marion, Indiana race, Ray bought a six-week-old piglet from a farmer.

He named it Johnnie Duroc Weishaar, and the two received a lot of attention from the motorcycle press, other riders, and of course, race goers. Weishaar thrilled everyone in attendance when, immediately following his win, he asked for Johnnie.

5. The Black Baby Rabbit and a Turtle

At the Dodge City races in 1921, Ralph Hepburn won with help from his new mascot, a black baby rabbit. Teammate Walter Higley had a turtle, thus dubbing the duo the tortoise and the hare. 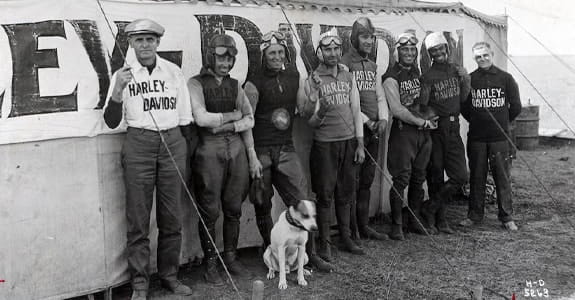