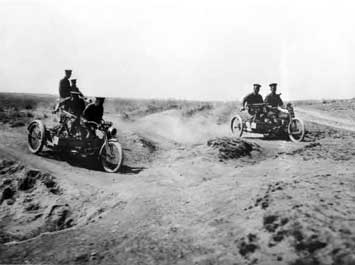 The tale of Harley-Davidson’s first foray into battle is the stuff movies are made of.

Picture the Harley-Davidson Model 17 traversing the jagged-tooth terrain of the Mexican desert. The year was 1916, in the wake of the Mexican Revolutionary War.  General “Blackjack” Pershing was considered one of the great American generals of his time and had a vision of using motorcycles for maneuver-style warfare. Little did William Harley and Arthur Davidson know when they began building bikes years before that they’d help Pershing fulfill his dream.

Impressed with his diplomacy skills, President Woodrow Wilson put Pershing in charge of leading a mission to capture Pancho Villa, who rose from being an average street criminal to a general in the Mexican Army. Villa killed dozens of Americans in the Army base town of Columbus, New Mexico, to pay back the United States for siding with his political rival. The United States was bent on getting even with Villa and thought Pershing was the man for the “retribution” job.

The fact that President Wilson chose Pershing for his diplomatic demeanor ironically made sense at first. The U.S. Army had the vexing chore of cajoling the head of state for Mexico, Venustiano Carranza, into letting them set up operations in Mexico to track down Villa. Carranza had defeated many groups to gain power in Mexico, including Villa himself. But just because Carranza and Villa had once been enemies, didn’t mean Carranza wanted to help the United States pave a path through Mexico to Villa.

At first, Carranza went along begrudgingly with giving the Americans access to Mexico. He let them in, but confined them to Chihuahua, where Villa owned land and was formerly the governor. Later, Carranza sabotaged the military’s efforts to secure Villa. In fact, when Carranza used guns to push back U.S. troops, historians posited that tensions between the U.S. and Mexico were so tight there was almost war.

Pershing sought to outsmart Villa, not just outgun him. He commissioned a fleet of Harley-Davidson® motorcycles for his maneuver-style war effort that centered on Pershing’s forces moving nimbly. Wilson also empowered Pershing with an unprecedented amount of resources to pinpoint Villa, including planes and cars. But other supplies were short, and the tour suffered from logistical mishaps.

According to a 1916 article in Motorcycle Illustrated, each air and land squadron had a small fleet of motorcycles with machine guns retrofitted to sidecars. With the capacity to travel quickly (20–40 mph) over treacherous terrain, Harley-Davidson® motorcycles were primarily used for dispatch and to assist downed planes.

Despite his persistent effort, Pershing couldn’t overcome the overwhelming odds stacked against him to declare victory against Villa. However, his military innovation, the motorcycle, rode on to success. Motorcycles performed so well they became a staple in both world wars. In fact, Harley-Davidson won awards for helping provide such a valuable asset during the most difficult times. The history between Harley-Davidson and the military is a long, proud one.

Check back for more posts celebrating the active military and veterans who ride.

A motorcycle haven for veterans with PTSD.

Sailor Jerry, the rowdiest rider of them all, lives on. 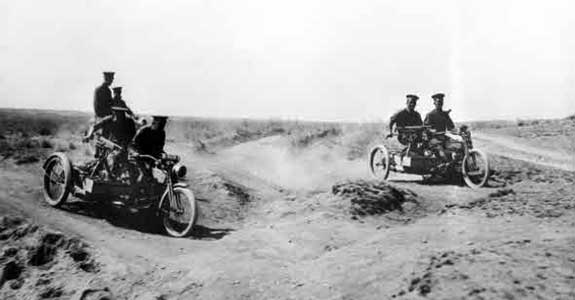