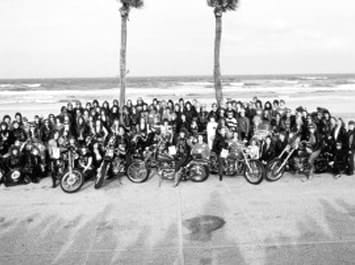 The earliest motorcycle riding organizations for women were formed in the 1940s. Women’s ridership grew in the following years but received increased attention in the 1980s and 1990s thanks to new publications and affiliations.

Women riders continue to be a force and are now represented by many groups, some local or community-based, some loosely organized, others long-established, and some recently created.

In 1985, Linda Jo Giovannoni and Cris Sommer Simmons started a women-focused motorcycle magazine, Harley Women. Featuring product reviews, rider profiles, family pictures, and stories of epic journeys, this magazine was one of the first publications dedicated to the experience of women as motorcycle riders, owners, and community members.

The women had arrived!

Built by her partner Bob Burrows, the bike has some beautiful decorative flourishes. It features louvred fenders, Candy Brandywine paint with gold leaf on the fenders and gas tank, a custom leather seat with a height of only 24 inches, and--to lower the overall height of the bike--2 inches have been trimmed from the front tubes.

With her custom bike, themed riding gear, coverage in motorcycling press of the time, and attendance at many rallies and rides, Anderson presented a striking image that fit the growing visibility of women riders of the era.

The Growth of Women’s Motorcycle Groups

Riding groups have continued to build on the legacy of the earliest organizations, the Motor Maids and the Women’s International Motorcycle Association.

With a strong social media presence, high participation in rides, and visibility at shows, more recently formed groups like Babes Ride Out and the Maiden Moto Art Show continue to demonstrate the importance of community for women riders.

See the “Harley Fox” on Display

Now on display in the Custom Culture Gallery at the Harley-Davidson Museum, Anderson’s “Harley Fox” motorcycle showcases the growth of women’s riding in the 1980s.

The bike is an important connection between the long history of women as riders, organizers, bike owners and builders, from the early years of the sport up to the present day and provides an inspiring vision for the future. 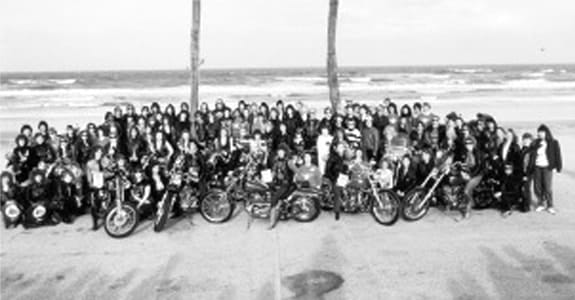