The Story Behind the Iconic Harley-Davidson "Hill Climber" Monument 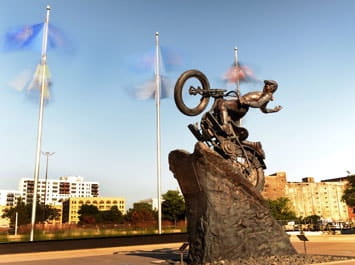 It has become The iconic image of the Harley-Davidson Museum®: The Magnificent “Hill Climber” Monument that dominates the courtyard. A gift from the Davidson family to Harley® motorcycle riders everywhere, it has made a lasting impression on hundreds of thousands of visitors from around the world since the Museum opened in 2008.

The statue consists of some 500 pieces of bronze, formed and fused with fire by experienced and gifted hands. The artist, sculptor Jeff Decker, is more complex still. Born in 1966 to teenage parents in Southern California, Decker’s father lived and breathed the local passions of the era: fast cars and motorcycles. Growing up in such a hotbed, Decker assumed every family lived the racing life. He knew no other way.

When his interests turned to art as a young boy (his kindergarten teacher first noticed his talent), he focused on automotive themes as subject matter. As he tells it, he didn’t really have a choice. Ultimately, the mechanical nature of cast bronze sculpture drew him as an open stretch of asphalt draws a rider.

He calls the Hill Climber monument his “masterwork,” a work of passion, the result of the shared vision of Willie G. Davidson and himself. Fittingly, he values the relationships he forged in the process more than he values the work itself.

He is a multi-faceted man with a fascinating story. One best told in his own words.

“[My father] is truly a savant. Not formally educated to the fullest but with an encyclopedic knowledge of cars, cars that are of his specific interest. He was my best friend and my mentor and my hero.

“When he was racing a ’32 Ford with Ardun heads, it was rare race equipment, but it had no esoteric value. It wasn’t hanging on the walls in collections in Don Orosco’s house; it didn’t show up in Hemmings as a collectible item; it was just used race equipment. You had to love it. It didn’t make economic sense. So he had perhaps the largest flathead speed equipment collection in the world, which at the time was a junk collection. Now, of course, it’s museum worthy. But at the time it was, ‘Why collect this shit?’

“The other side of the family, my mother’s side, was a disturbed group. My mom’s sisters dated Hell’s Angels, they served prison terms, they died of addictions. And so I saw these girls dating Hell’s Angels, and I thought they were the neatest guys on the planet. But my dad [told me to] stay away from these people. I was like, how could you not like these guys? And he would go, ‘They collect junk!’ And so I had this embedded into me early.

“Because I was always in my dad’s shadow, I tried to express myself in a different way, which was art … and my subject matter was naturally mechanical. I don’t think I ever chose my path, it just came to me. I was groomed to be what I am. I’m not original, I’m not special, I’m not unique. I’m just simply what I was supposed to be when I grew up.

“The nature of the lost-wax process is the only form of art that is truly mechanical. You need to learn mold-making and welding and casting and metallurgy and patination, and all these different things – which, to me, are so much like painting a car, rebuilding a motor, massaging a steel panel. And so I saw the likeness of this high art form to what I was familiar with.

“I sculpt my figures in clay and my motorcycles in wax. Two reasons: The wax I can get in a circular form, in rods or squares, triangles, whatever. And because motorcycles are made out of geometric and machined-looking parts, it lends itself better to the sculpting of the bike. Then when I cast the piece I have two textures. [The motorcycle] is more smooth in surface, hence looking more machined. The figure, the rider, is clay, which is more organic. And that is exactly what I want.”

[Both approaches ultimately result in a wax figure that is dipped repeatedly into a ceramic slurry, forming a mold. The wax melts away as the mold is fired in a kiln – hence the term “lost-wax process.” Molten bronze is then poured into this ceramic mold.]

“If you look at the great, great artists of the past … they were obsessive-compulsive collectors. … Without criticizing other artists, to me to be a true artist, I don’t think balance is a part of your life. And what manifests in my ‘sickness’ is my collecting. You have to be a screwed-up, compulsive individual to express yourself well.

“I’ve seen enough Evos, and I’ve seen enough Knuckleheads, frankly. I want to see the stuff that you only see once or twice in a lifetime. And my art and what I do provide a comfortable living so I really don’t want a hundred Knuckleheads. I want one bike that’s worth a hundred Knuckleheads. When there’s a bike where you gotta wait for a guy to die to get; or you gotta bug a guy so long, where you got a decade invested in your relationship before you can get it out of him. I don’t sleep at night thinking about bikes. It’s really a bad obsession.

“So what do I collect? I collect human beings. I collect stories. And I’m lucky to get a piece of them when they go away. Provenance is extremely important to me.”

On Stanley Wanlass, friend and mentor

“He’s the foremost automotive sculptor in the world, really is the first guy to recognize the automobile as a worthy subject for art. … He’s just the salt of the earth, a national treasure.

“I feel like I’m Jack and the beanstalk. I take my art out, and my wife is enraged when I come home without cash but with another motorcycle. And Stan is the same way. When you see his work, you’ll clearly see his influence [in mine].”

On Willie G. Davidson and the genesis of the Harley-Davidson Museum Monument

“One time I had done this piece called ‘By the Horns,’ essentially a three- or four-foot model of what is the Hill Climber piece. A 1930 DAH hill climber, only six exist. (I have one but the Museum doesn’t.) They’re really rare. To me they were the quintessential purpose-built factory hill climber.

“Willie walked in, about a year or two before the Museum … he looked at the piece and said, “Okay, we want one of these.” He said the Museum’s for sure, and the Davidson family wants to donate something to this Museum. He said let’s go all out, let’s go life-size. And then I think, you know, life-size is just not that magnificent. So I came back and said let’s do ‘heroic,’ let’s do life-and-a-half.

“It was really a deal that took place between [me and] Nancy and Willie Davidson; it was a gift from the Davidsons and from me. I made that bronze as big and as powerful as possible on a budget, just because I knew that it would be my masterwork. I really didn’t want to make any money. And it was all done on a handshake. I put my whole life on hold to finish that thing … and I don’t regret a moment of it.

“[The Davidsons and I] are lifelong friends. A beautiful relationship came out of that bronze. Far more than the sculpture itself was the relationship that we built and the memories we share.”

A version of this post appeared in H.O.G.® magazine. 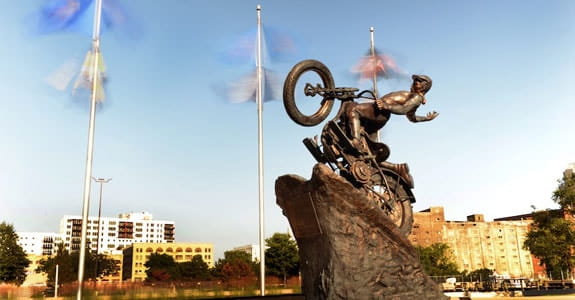