The Harley-Davidson® trike goes from courier to cruiser 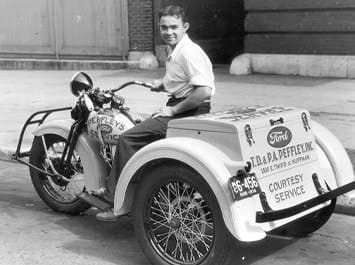 In 1913, they launched the Forecar, a "2-1" motorcycle—two wheels in the front, one in the back—with storage riding before the engine.

In 1915, the Motor Company released the Package Truck—turning the sidecar into a cargo box—and a powerful new trend began.

Postal carriers and delivery businesses snapped them up, adding to H-D profits from motorcycles, apparel, and accessories. One sales brochure even compared the improved cost of a Package Truck fleet to a stable of horses. The Package Truck became the “commercial” division, companion to “pleasure and sporting.”

In November 1931, President Walter Davidson unveiled the Servi-Car in a statement to stockholders. It was a hit—keeping a spot in the lineup for 41 years (one of the longest lifespans in H-D history).

The Servi-Car was the vehicle of choice for businesses making cross-town deliveries—mainly car dealerships at first. Dealership employees made home deliveries by hooking an optional tow bar to car bumpers. The attachment kept towing a one-man job, and the cargo box worked as a rolling advertisement.

A Ford dealer in Pennsylvania reported that home delivery time was cut in half, and they “would not accept $1,000” for their Servi-Car. The streets teemed with deliverymen in jumpsuits and neckties as other businesses joined in, using Servi-Cars to deliver anything and everything.

The Servi-Car was the first Harley-Davidson® motorcycle with an electric starter—one year before the 1965 Electra Glide® motorcycle. Structurally, not much on the vehicle changed over the years. The rear trunk became fiberglass, and the front fork turned into a Hydra-Glide front end. The Servi-Car became a fixture, relying on its trusty flathead engine until 1973.

For 35 years, the only H-D® trikes were aftermarket conversions of two-wheelers or owner-chopped bikes. The Motor Company prototyped the Trihawk in the 1980s, and the Penster in 2006, but neither made it to the showroom floor.

Finally, in 2009, H-D rolled out a trike for the everyday rider: the Tri Glide® Ultra Classic® model. With flat-tread rear tires, plenty of storage, and a full set of touring amenities, it had come a long way from the Servi-Car.

After the Tri Glide® Ultra Classic® model, the Street Glide® Trike, the Freewheeler® and the CVO™ Tri Glide® models continued to prove that a trike can hold a low, aggressive stance and still have all the advantages of a three-wheeled motorcycle.

From package hauler to custom cruiser, this big rig turned the world on its head—proving that sometimes, three wheels are better than two.