“During the past five years the Harley-Davidson Motor Company has had a new building under construction practically all of the time. As soon as one was finished another was started. While the contractors were finishing the upper floors the lower floors were being used for manufacturing.”

The Harley-Davidson Motor Company began in a small shed behind the Davidson family home in Milwaukee, Wisconsin. In 1906, the founders built a one-story factory one block north.

The first buildings of a new modern factory were completed in 1910. The new five-story steel frame and brick structure, built in two stages, soared over the earlier factory.

The company sold 50 motorcycles out of its first factory in 1906. Even as the factory was under constant construction, Harley-Davidson® motorcycle sales tripled between 1910 and 1912.

Three additional building projects between 1912-1913 occupied the space upon which the first factory was built and seamlessly completed the wedge-shaped building that commands the site today on the north side of Juneau Avenue.

The final section included a north-side dock and elevator directly connected to the shipping and receiving areas. The proximity to the railroad line was critical to the factory operations, bringing in materials and shipping out completed motorcycles.

This effort represents the company’s first major expansion of its production facilities when it was becoming a world leader in the manufacture of motorcycles. The Motor Company went from Midwest upstart to global success story in a remarkably short period of time.

By 1920, it was the largest motorcycle manufacturer in the world, selling more than 27,000 motorcycles in 67 countries.

Commenting on the incredible growth in motorcycle sales, the company’s new publication, The Harley-Davidson Dealer, noted “…the entire factory used by the Harley-Davidson Motor Company in 1908 has now been torn down to make room for a larger structure. No better example has come to our attention to demonstrate the importance and the permanency of the motorcycle industry.”

The Motor Company focused on “providing the best possible working conditions for its employees” in constructing its new factory. The design incorporated plenty of windows to provide ample light and ventilation, and numerous details to make the building “absolutely fireproof.” The founders hired renowned Milwaukee architect A. C. Eschweiler to develop the plans.

The increasing number of women within Harley-Davidson’s work force had a concrete impact on the factory. In 1912, the building plans included a large “Girls’ Rest Room,” then a relatively uncommon feature for Milwaukee factories.

In 1913 Harley-Davidson also built a spacious photo studio on the factory roof. The motor company used the medium of photography extensively as a sales tool for dealers to promote the benefits of the motorcycle in work and recreation. The location of the photo studio, with a large wall of north facing windows, let in ample amounts of natural light—perfect for product photography. Upon its completion Harley-Davidson boasted of having “the most completely equipped commercial photograph studio and darkrooms west of New York City.”

Factory construction took a break after the feverish schedule of 1910-1913. Manufacturing technology was evolving quickly during this period, and machines were now automating some formerly manual operations. The company spent a few years consolidating and refining operations before breaking ground on a building in 1918 across the street from the original factory to house a new breed of “automatic machines” called in publications as the modern “Automatic Shop.”

In 1919-1920, the company built a large six-story building near the “Automatic Shop.” Three smaller building projects between 1921 and 1926 would fill out the factory on the south side of the street and bring Harley-Davidson’s building boom to a close.

By 1926 the construction of the Juneau Avenue factory campus as we know it today was largely complete and the familiar red bricks of what is now Harley-Davidson’s corporate headquarters were in place.

The company has continuously occupied its original factory site since the buildings were first constructed.  The functions within have changed over the past century, but the buildings remain intact, a testament to the vision of the company’s founders.

In 1947 some assembly production was moved to a local off-site location.  Motorcycle production at Juneau Avenue ceased in 1973 and the buildings were converted to serve as an expanded corporate headquarters. In 1994 they were added to the National Register of Historic Places. These historic structures are a visible, active tie to Milwaukee’s proud industrial heritage.

Large-scale drawings that can be inexpensively reproduced are required to coordinate the work of contractors in building construction. Over 1,300 sheets gradually accumulated in the files of Harley-Davidson’s facilities staff. They were transferred to the H-D Archives in 2018 to preserve this important part of the company’s history.

In 2019, the H-D Museum opened the exhibit titled “Building a Milwaukee Icon: Harley-Davidson’s Juneau Avenue Facility” that includes reproductions of original architectural plans and period photographs from the H-D Archives documenting the flurry of construction activities during this early period in the company’s history. 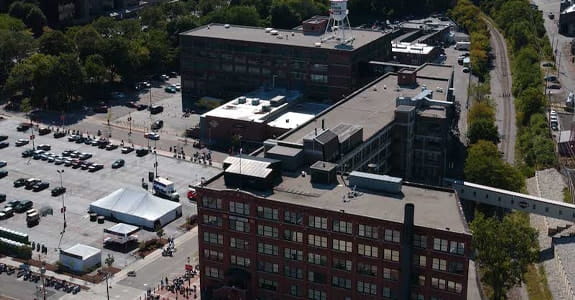