The Motorcycle Sidecar - A History Lesson 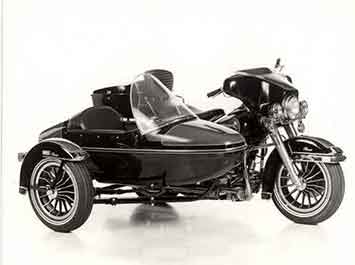 From nearly the beginning the sidecar has been a part of motorcycling.

And they are more than just something you used to hook onto your bike to have a pal ride along. They played a part in commerce, warfare, and in the general spread of motorcycling's popularity.

After all, when you get more use out of something, it's going to increase its appeal. Let's take a more in-depth look into something that is much more than just a motorcycle novelty.

What is a sidecar?

Its popularity exploded early as an alternative to the family car, providing both fun and practicality for the rider.

We can see from early Harley-Davidson marketing photos how the sidecar could be used for supporting the owner's job functions such as rural mail routes, and how it could double for recreational activities such as hunting and fishing.

Who invented the sidecar?

The sidecar was initially developed for bicycles back in 1893 in France.

The inspiration for their invention was a newspaper competition that wanted to discover the best way to get a passenger onto a bike. Turns out on the side was better than on the back.

The winner of the contest was a French army officer named M. Bertoux. It wasn't till ten years later, in 1903, however, that a patent was filed by Mr. WJ Graham of Enfield in Middlesex (near London).

Sidecar mounting lugs or "fittings" began to show up on Harley-Davidson frames as early as 1905, even though it was 1914 before the sidecar is made available in factory literature.

The Rogers Sidecar Company made the earliest sidecar versions, and it was not until the following year before Harley begins manufacturing their version.

Initially, the sidecar is linked up to only the larger displacement twin cylinder models. From the inception, the sidecar was built in both right-hand and left-hand versions, the latter for international export.

In 1917, a Dealer Service Bulletin appeared with directions in "swapping out" a standard motor, with a specially designed engine for sidecar use.

The following year, a special two-passenger Model QT or "Chummy-Car" is made available to the public. By 1930, a decision was made to make available a lighter sidecar for use with the 45 cubic inch models, which had been released the previous year. The Goulding Manufacturing Company of Saginaw Michigan was contracted to provide the LS or litecar chassis and body to enhance the model lineup.

Sales of the metal body "L" model sidecar for EL & FL models also continued throughout the 1950's and into the 1960's. The next major change took place when a substitute was sought out to replace the metal boxes used by the Servi-car model, to a new fiberglass box. The Tomahawk Boat Manufacturing Corporation in Tomahawk Wisconsin was acquired to complete the task. The process of using two separate pieces (top & bottom) to form the shell for a boat became almost a natural occurrence from evolving from the metal body sidecar tub to fiberglass. The fiberglass body, which debuted in 1966, was manufactured until the sidecar was discontinued in 2011.

How do sidecars work?

Contrary to what you may expect, the side wheel of a sidecar is not directly aligned with the rear wheel of a motorcycle. This is unlike a motor tricycle (trike), where both rear wheels are powered by and share the same axle.

Instead, the sidecar is a frame and a wheel. The frame can be fixed to the bike, or it can be attached in a manner that allows the bike to ride as if there was no sidecar attached at all.

The sidecar, historically, is a one passenger vehicle with a small trunk compartment in the back. It's not uncommon for the sidecar to be constructed in a manner that makes it functionally a large cargo hold.

Most often, the sidecar is attached to the bike's right side so that it's the bike and not the sidecar that's closest to the middle of the road.

How do you drive a sidecar?

Sidecars make the bike asymmetrical. Since most sidecars tend to be mounted on the right side, enabling the bike to go faster around left turns than right ones.

While a sidecar prevents the bike from tipping during left turns, during right turns, speed should be closely monitored.

Why are sidecars called hacks?

Sidecars earned the nickname "hack" thanks to a village near London called Hackney. Hackney was the birthplace of a particular breed of horse that was used to give rides in the growing metropolitan landscape during the 17th century.

The influence of the term is so widespread that even to this day, in Boston, the medallion a taxi operator receives is known as a "Hackney Carriage" medallion. So, once sidecars were introduced and could carry passengers, calling them "hacks" was only natural.

How were sidecars used in the military?

Harley-Davidson motorcycles were first used by the U.S. Army when it ordered twelve motorcycles with sidecars with mounted machine guns on them for the General Pershing's 1916 Mexican Excursion. A combination of solo and sidecar-equipped machines was selected, with the sidecars being upgraded to carry machine guns.

Although these first military machines were just slightly modified stock motorcycles, this was the start of H-D producing military specific motorcycles that were not meant for civilian use.

During World War One, Harley-Davidson supplied 20,000 motorcycles providing an ideal way to rapidly deploy machine gun crews into position. Medical units used them to evacuate wounded on stretcher-equipped sidecars, and to return medical supplies and ammunition to the front lines. They were also used for reconnaissance and for doing perimeter security patrols.

At the onset of WWII in the late 1930s, Harley-Davidson’s production would see a massive increase and a complete switch to military machines. These bikes became the transportation choice of messengers, helping to close the wide distances between mobile forward units.

Sidecars are still legal; they have just dropped so widely in popularity that they are rarely seen on the road.

Can you still buy a motorcycle with a sidecar?

Thanks to the success of the Tri-Glide® model, in 2011, Harley-Davidson announced that it would no longer provide new bikes outfitted with sidecars to the general public. However, specialty new sidecars made for the Secret Service can be seen in the presidential motorcade.

Sidecars played an indispensable role in the history of motorcycles due to their contributions to warfare and commerce. And while they remain a distant memory today, their role cannot be understated. 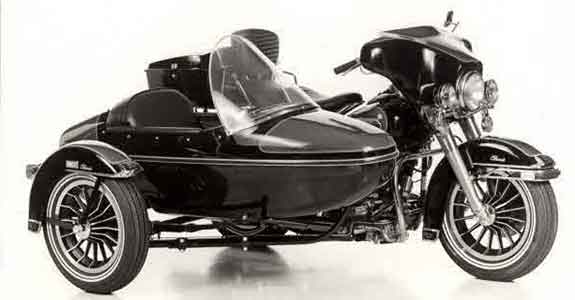