The Most Recognized Photo in Harley-Davidson® History: Ray, Johnnie and the Hog Legacy 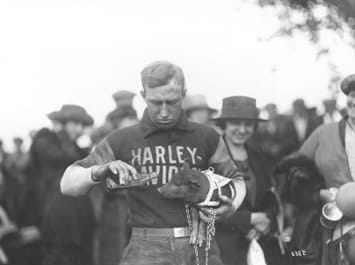 100 years ago, a member of the Harley-Davidson racing team shared a Coke with a piglet. It would become one of the most recognized photos of Harley-Davidson history, and a key moment in the brand’s lore.

The History Behind the Photo

The racer is Ray Weishaar, a member of the factory racing team since 1914. The animal is Johnnie Duroc Weishaar, a six-week-old piglet, adopted from a local farmer, who became the race-winner’s mascot—complete with a festive white and green H-D pennant tucked into his harness—for the 100-mile road race held at Marion, Indiana, on Sept. 6, 1920.

For big events like the Marion “Cornfield Classic” race, racing teams would arrive days in advance in order to practice, tweak their machines, and stay abreast of the weather and track conditions. Press, too, arrived early and wrote about the activity as part of the comprehensive race coverage in their trade magazines.

It seems Ray and Johnnie drew attention early on, earning numerous mentions in reports of the famed Marion race both before and after Ray’s big win. Excerpts from Motorcycling and Bicycling and Motorcycle & Bicycle Illustrated share the behind-the-photo story of the now-iconic duo.

Ray Weishaar got lonesome the second day he was on the grounds and went out seeking something to amuse himself.

An hour or two later a shrill squealing warned his teammates that something was happening in the pit tent. They rushed in and found Ray walking the floor with a six-weeks old porker and trying to feed it out of a bottle, but the pig baby didn't care for that kind of nursing.

"The farmer said this was a runt and I could have him cheap," explained Ray, "but he didn't tell me how to feed him." Advice was freely given by all the other members of the team, but the pig wouldn't take it and Ray couldn't.

Finally, they decided to put the milk in a dish and see what would happen. It disappeared to an accompaniment of contented grunts and everybody was happy. Ray says he will have roast pig for Thanksgiving.

Nothing out of the ordinary today, except that Ray Weishaar took the pig out for a walk and Ray and the pig had a race down the course, but the pig hogged all the road, and Ray hit the button.

For amusements the boys in the H.-D. camp have both a pig and a phonograph, and when the phonograph is playing and a couple of racing motors backfiring with the pig in on the chorus, well—some music.

10 p.m. — Ray Weishaar drops in to report that the pig mascot was resting well after his dinner and bath.

Midnight, and the pig is well!

Ray made all arrangements before the meet to hog the race when he purchased a pig for his mascot. However, he got in bad with the pig before the race started by leading it around with a bottle of milk without giving the pig any to drink.

The meet was closed as far as first place was concerned when Ray Weishaar crossed the tape on his 40th lap. At the finish he was affectionately met by his pig and a few ladies who gave him some very nice kisses. Yes, the pig was the first.

Almost nothing is said about Johnnie after the race, but the two would later be reflected as the source of the “Hog” moniker. There’s no single, specific use of “Harley hogs” that we can link to this—or any other—event, but trade press references, like the excerpt above, to hogging race wins is where legend says the pet name (pun intended) originated.