MOTORCYCLE INSURANCE QUOTE
Protect your bike now, with the coverages you want.
contents of this are filled by ValidateForm()
Call Us
is invalid, please correct.
is required.
Retrieve Saved Quote Make a Payment
300
False
500
500
Get a free quote
Save on your Insurance
Start my quote
Back to The Open Road 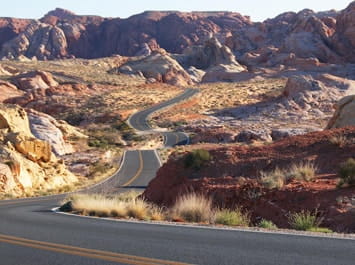 We ride the freedom of the open road — and taking photos to share and remember the beautiful places we discover along the way is all part of the experience. Here are our top 10 photogenic locations around the world that you’ll want to add to your Instagram bucket-list.

Cape Route 62 links Cape Town to Oudtshoorn, the Langkloof valley, and Port Elizabeth, via 500 miles of vineyards, ostrich farms, small towns, and the red hills of the Klein Karoo.

Not only is it one of the country’s main scenic routes, to many, it’s one of the world’s greatest road trip destinations.

Take the NI from Cape Town, through the Du Toitskloof mountain tunnel, and then turn off at Worcester to travel along the R60 to Robertson and then on to the R62.

‘Ronnie’s Sex Shop’ (actually a small pub and restaurant) has become the essential photo opportunity on the R62 — it’s in the middle of nowhere, 16 miles outside Barrydale. Its incongruous sign (painted by Ronnie’s prankster mates onto what was originally a fruit and vegetable stall) makes it a magnet for global visitors looking for that perfect image.

Reach the top, and you’re rewarded with the incredible sight of the Pasterze glacier, the pyramid-shaped 12,460-foot Grossglockner mountain, and maybe even some Alpine wildlife such as marmots, ibex, and vultures.

The Grossglockner High Alpine Road leads from Fusch-Ferleiten in Salzburg to Heiligenblut in Carinthia. Start at Bruck in the Salzburg Valley and continue through the Ferleiten toll entrance — the road is open in daylight hours from May to October.

The highest point, the Edelweissspitze, is the best vantage point to photograph the fantastic vista across the Alps. The turn-off for Edelweissspitze is marked, and there is a large parking area by Restaurant Fuschertörl.

Its narrowness, steep incline of 10%, and series of hairpin bends make it a magnet for riders looking for that ultimate evocative shot.

Trollstigen is part of Road 63- drive southeast from Åndalsnes and look for vehicles crawling up what appears to be a vertical cliff face.

The classic photo can be taken at the 2,300-foot plateau. There’s a car park and several viewing balconies - the best is the very last platform along the purpose-built trail behind the visitor center, suspended above the sheer drop and overlooking the bends and Stigfossen waterfall.

Jordan’s Desert Highway may be the quickest route from the capital city of Amman to the awe-inspiring desert valley of Wadi Rum, but the King’s Highway is by far the more scenic.

This 230-mile route will take you through a desolate desert scenery like nowhere else on Earth and past the iconic sandstone city of Petra.

From Amman, take Route 35, the King’s Highway, through the primordial landscape of the Jorand Rift Velly, then join the Desert Highway (Route 15) to get to Wadi Rum.

Wadi Rum is unbelievably photogenic - if you’ve seen Lawrence of Arabia, you’ll be familiar with the red sands and mass of soaring rock formations fittingly known as ‘The Valley of the Moon.’ But the definitive shot is best taken along the way, on the King’s Highway.

In extreme north Norway, the North Cape has a 1,000-foot-high cliff, with a globe sculpture marking the spot where the frigid waters of the Atlantic and Arctic oceans meet.

Located in Finnmark, also called Norwegian Lapland, the North Cape is a monumental natural experience with breathtaking views and abnormal climatic conditions. The dramatic cliff allows you to stand at Europe’s northernmost point.

The North Cape can be reached via the E69, which begins 80 miles away at the town of Olderfjord. The road takes you as far north in Europe as it is possible to go, through stunning scenery.

Many visitors enjoy watching the midnight sun (the summer sun doesn’t set between the middle of May and the end of July) or the sunset over the Barents Sea from the North Cape plateau. Still, the iconic Nordkapp globe monument is the money shot.

New Zealand’s oldest heritage trail, the Forgotten World Highway, is mysterious and eerie. Stretching from the North Island’s west coast to its central plateau, through tunnels, gorges, and forests, it wends its way across four mountain saddles.

The Forgotten Highway — or State Highway 43 — runs for almost 100 miles between Stratford and Taumarunui on New Zealand’s North Island.

The Strathmore Saddle offers a spectacular view of the volcanoes Tongariro, Ruapehu, and Ngauruhoe to the east, and Mount Taranaki to the west. A rest area is marked by a plaque where you can stop and take the definitive picture.

Route 66 was the way west for millions of Americans heading for California, made famous in songs like Take It Easy by the Eagles and (Get Your Kicks on) Route 66 recorded by Nat King Cole. Winslow, a railroad town in Arizona, is one of the few remaining places where you can experience the original surface of the legendary two-lane concrete Mother Road connecting Chicago and Los Angeles.

On the corner of West 2nd Street (Route 66) and N Kinsley Avenue is a life-size bronze statue of a man carrying an acoustic guitar and a mural depicting scenes from the Eagles song. On the road is a painted Route 66 shield.

The Great Ocean Road begins in the surf capital of Torquay and runs 250 miles to the peaceful town of Nelson.

No Great Ocean Road trip is complete without taking a picture of the 12 Apostles rising from the Southern Ocean, about four hours west of Melbourne (170 miles) along the Great Ocean Road. Descend all 86 steps down to the wild beach for a ground-level view, or follow trails from the car park that lead to several elevated outlooks.

Each one is 60 feet high and represents one of the world’s largest pieces of sculpture.

From Rapid City, South Dakota, take US-16W and SD Highway 244. Sturgis is about an hour away from the memorial.

There are so many!

For a shot of the sculptures flanked by flags representing the country’s states, territories, commonwealths, and one district, head to the Avenue of Flags. The Mount Rushmore Amphitheatre and viewing terrace near the Sculptor’s Studio also offer fantastic views.

If you don’t want to pay the parking fee, there are great spots along the Iron Mountain Road.

Iceland’s Ring Road will take you along the south coast, with its magnificent Seljalandsfoss and Skógafoss waterfalls, the Dyrhólaey cliffs, and the Jökulsárlón glacier lagoon, before taking you east and north to experience the fjords, and then west to the Golden Circle route. If you’re really lucky, the Northern Lights will put on a performance too.

Route 1 is circular and, as of 2019, fully paved. Reykjavik is a logical start point for most - head southeast to get straight into unique Icelandic scenery.

The famous waterfall of Seljalandsfoss is 80 miles from Reykjavik, at the intersection of R1 and R249. Follow the walking trail to get behind it and capture a shot through the sheets of falling glacial water.