Game On, Again. A Rebirth of Motorcycling 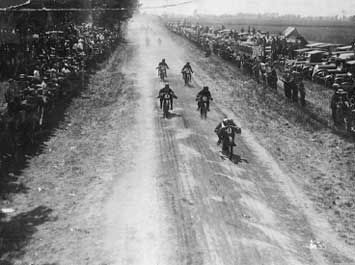 How a small town in Indiana put motorcycle racing back on the map after “The War to End All Wars”.

World War I put a lot of things on hold, not just in the motorcycle industry but in the world at large.

When the war ended in 1918, no one was sure how, when, or even if things in the motorcycle world would get rolling again. So in 1919, when the Motorcycle and Allied Trades Association (predecessor to the AMA) organized a large-scale road race in Marion, Indiana over Labor Day weekend it was a pretty big risk.

Harley-Davidson and other manufacturers with motorcycle racing operations agreed to compete. But war-time gas shortages had halted racing activity, and civilian ridership had declined, as well, due to both limited motorcycle production and the sheer number of men in service.

The racers would come – but would anyone show up to watch?

A five-mile track was laid out on country roads around Marion, for a 40-lap, 200-mile race. Intersections were slightly banked and right-angle turns were rounded, to allow for higher speeds. These were dirt roads, of course, so the big problem was dust.

In practice laps, near-misses with mailboxes and other riders caused problems. The solution was to oil the track and surface the backstretch with crushed limestone. But this caused a new concern: rocks spewing from rear tires that damaged both riders and bikes running behind.

Parkhurst went on to win with a time of 3 hours, 6 minutes and just over 33 seconds.

Even more important than the result was the attendance.

An estimated 15,000 spectators watched the race, many riding on motorcycles from as far as the West Coast. More than 700 hotel rooms were filled, even as residents opened their homes to fans.

Motorcycling and Bicycling magazine reported that “every street of the city” buzzed with motorcycles. Among the attendees were founders Walter Davidson and William S. Harley.

The success of the 1919 race led to an expanded 1920 event.  A hill climb race from the previous year was repeated, and Civil War veterans of the local National Soldiers’ Home were given rides in sidecars on the race course.

Red Parkhurst was among the riders.  Cardboard tags that read “I have donated my sidecar for the Old Soldiers’ Outing – Have You?” spread like wildfire throughout the weekend. But the most historic moment of 1920 came after the race.

Earlier in the day, Harley-Davidson’s Ray Weishaar adopted a runt piglet from a local farm and kept it close by as he wandered the paddocks. Weishaar won the race with a blistering average speed of more than 71 miles per hour – a new record for a 200-mile event. Weishaar included his new friend, “Johnny,” in a post-race photo op, creating one of the most recognized photos in Harley-Davidson history.

A Rebirth of Motorcycling

World War I decimated the civilian rider market, leading several motorcycle manufacturers to lock their doors permanently. Dealers throughout the industry closed, while others scraped by with used bike sales, accessories, and service work.

Those races – that first one, especially – were about a rebirth of motorcycling, a triumphant return of the sport so many still loved. To quote one journalist in 1919, “The game is on again.” 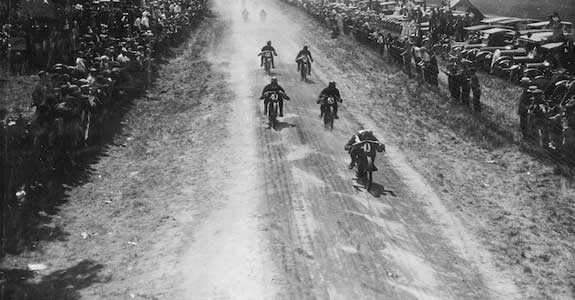