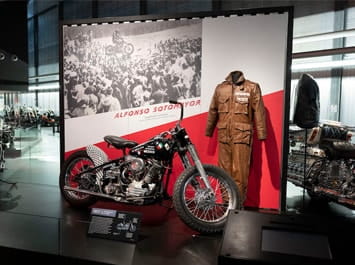 Harley-Davidson has had a long presence in Mexico.

By 1913, a mere 10 years after the company was founded in Milwaukee, dealers were already getting started in Guadalajara and Chihuahua.

The shop of Benjamín Martín del Campo was established in Mexico City in the 1920s, providing motorcycles for a country recovering from many years of disruption and the violence of revolution.

The first motorcycle police organization in Mexico, the Hermandad de Motociclistas, was founded in 1927. Officers performed stunts that were documented by the Mexican photographer Vicente Cortés Sotelo, who also made portraits of officers and their machines in beautiful civic parks and in front of imposing urban monuments.

The popularity of the traffic police stunt teams was celebrated in the 1951 movie, A.T.M.: ¡¡A toda máquina!!, with Pedro Infante, the Mexican film heartthrob, playing a traffic officer. A rider himself, Infante performed his own riding and stunts for the film. Traffic police stunt teams still exist in Mexico City and other areas of the country, performing at festivals, parades, and in competitions.

He was born in 1911, in the state of Hidalgo, located in central-eastern Mexico. He began racing in the 1930s and was performing motorcycle stunts by 1940. In 1947, he achieved one of the many wins of his lifetime: a record-setting time for the ascent of the volcano Popocatépetl.

In the 1950s Sotomayor became a member of the Mexico City traffic police and performed with their stunt team.

Sotomayor received a ¼ mile drag racing engine from Harley-Davison in 1958, with the “commitment to continue reaping triumphs and promote the brand in Mexico.”

Both the Enthusiast (September 1958) and American Motorcyclist (November 1958) list yet another win for Sotomayor, this time in the 1200cc class at the International Championship Scrambles at Nuevo Laredo, Mexico, riding an H-D® 74 motorcycle.

In the 1960s Sotomayor retired from racing, but not from riding. He began performing his Jump of Death, or the Salto de la Muerte. Riding off a ramp only about 16 inches in height and a mere 20 feet in length, Sotomayor would jump his #7 Panhead over a row of people laying on the ground.

Eventually expanding the jump to leap over 48 prone participants, Sotomayor performed the jump internationally until his retirement in 1977, raising funds for organizations like the Red Cross.

The Harley-Davidson Museum recently acquired Alfonso Sotomayor’s 1957 Model FL. The bike was ridden in races and jumped in the Salto de la Muerte. It includes some heavy modifications, such as a true dual “shotgun” style exhaust; ropes on the front forks to limit rebound on jump landings; and a vertical magneto for ignition, replacing the battery, coil, and generator, and reducing the overall weight of the bike.

Flags and city names from places where Sotomayor performed are painted on the gas tank, and the names of his fellow Mexico City traffic police officers, along with a symbol of their rank, appear on the oil tank.

Sotomayor was the first motorcyclist inducted into the Mexican Motorcycling Hall of Fame (Confederación Deportiva Mexicana, Salón de la Fama) when it is created in 1978. The entire Sotomayor family, including his wife Pilar and many of their children, have been avid riders, stunt performers, and racers.

Miguel Sotomayor, one of Sotomayor’s sons, is also included in the Hall of Fame, and his daughter Pilar performed with the Mexico City traffic police.

Sotomayor passed away in 1986. He continued to support police stunt groups throughout his long career and is listed among the deceased members of La Confederación Internacional de Motociclistas, Oficiales y Policías de Caminos, A.C. His 1957 Model FL panhead is currently on display at the Harley-Davidson Museum. 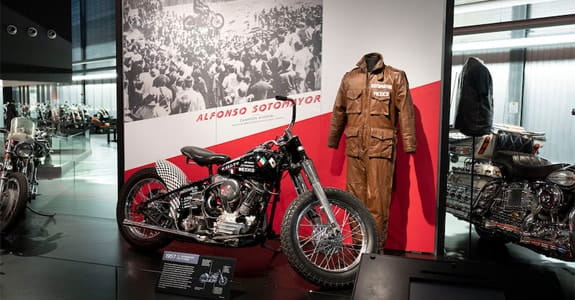