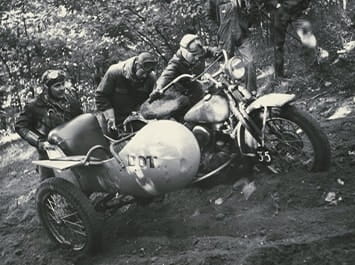 Since 1903, Harley-Davidson® motorcycle riders have pursued their love of motorcycling on pavement, over wooded hills, through stone-choked creek beds, and up rocky mountain sides.

In the decades before America paved its highways all kinds of riding were possible. Roads had been built for horse traffic, not motorized transportation, and even on clearly marked paths early riders had to be prepared. Today, we’d call this off-road or adventure touring; back then it was just called riding.

Harley-Davidson’s founders knew firsthand how demanding rides could be because they were not only businessmen, they were avid motorcyclists, too.

William Harley and the Davidson brothers enjoyed riding in all conditions. They competed in and won endurance races, took the motorcycles on fishing trips, and, while touring, experienced the varied conditions of American roads.

In 1914 the Model 10-F was Harley’s top-of-the-line bike. The two-speed machine had features such as a Step-Starter, which allowed riders to start the bike on its rear stand, and luggage rack, important for packing gear for long travels. Della Crewe and Hamilton Laing – who both completed transcontinental rides – rode 10-F models.

Laing, who was a well-known writer, penned magazine articles about the flora and fauna he encountered on his travels in the United States and his native Canada. Calling himself a “motorcycle naturalist,” he used his Harley-Davidson® motorcycles (he would own more than one) to access remote regions of Canada and the United States, often where no roads existed.

“The Harley-Davidson would not be much use to me if it could not stand up,” Laing reported, “But it stands.”

The Sport Model was another motorcycle Harley-Davidson engineered to tackle rough country. First released in 1919, the Sport model motorcycle was sold for a wide range of activities. The Motor Company promoted its fuel economy, lighter weight, and smaller size as positives for the urban commuter, but also the cross-country enthusiast.

It’s opposed-twin engine was easily serviced, an attractive feature for riders had to be their own mechanics out on the road. The engine also produced decent speeds which made it a capable machine for trail riding and touring.

Tales of off-road triumphs, like Jack Fletcher’s successful summit of “Old Baldy,” made for compelling advertisements as they demonstrated the Sport Model’s capabilities. Harley-Davidson highlighted several people who climbed mountain roads astride its motorcycles, including Ted Gilbert who summited Oregon’s 4,062-foot Larch Mountain in 1920.

Even as highways modernized, riders continued to find fun and competition in off-road riding.

Many local motorcycle clubs sponsored endurance or reliability trials called turkey runs (for the turkeys awarded to the winners), midnight runs (for races that occurred at night), scrambles, and other events for their communities.

In the beginning most riders used their everyday motorcycles, such as heavy Big Twins, in off-road competitions. In the 1950s, however, manufacturers started to offer motorcycles specifically for off-road.

Harley-Davidson's first true off-road motorcycle was the 1958 XLCH Sportster® motorcycle – “CH” stands for “Competition Hot.” This model was a forerunner of current-day motocross bikes. The XLCH boasted tires with deep treads for rugged terrain, and all weighty “extras” like lights and instruments were removed.

The motorcycles in the Archives collection tell many stories, including Harley-Davidson's long experience with off-road adventuring. If you would like to hear curator David Kreidler share more of the stories featured in the Museum’s “Off-Road” exhibit, tales about the history of motorcycles designed for rough roads, the people who rode them, and the adventures they shared, check out our online virtual tour.

And, as always, if you want more Harley-Davidson history, stay tuned to our social media pages or visit us at hdmuseum.com.

Dot Robinson was a Harley-Davidson dealer, Motor Maids co-founder, and a champion off-road endurance rider who piloted her Big Twin sidecar rig to numerous victories. In 1940, she conquered the grueling Jack Pine Enduro, becoming the first woman to win an American Motorcycle Association event. She repeated the win in 1949.