How to countersteer a motorcycle correctly

You’re riding on a crowded motorway, trying to find some ‘breathing room’ to settle into. Just when you think you’ve found a good spot, a truck decides to move into your escape route, then starts to drift into your lane.

Suddenly, you’re handlebar-to-hubcap with the truck, with barely any room between you. It’s a scary situation. Your heart skips a beat, your brain freezes up, and in a moment of mild panic, you turn your handlebar away from the truck. When your bike edges towards it as a result, you realize it’s the wrong move. Fortunately, the truck sees you and moves back into his lane.

Later, you’ve escaped the city and are enjoying some winding country roads.

But instead of gliding through the twists and turns, you seem to be fighting your bike, drifting closer to the center line on the outside, and to the shoulder on the inside. After a close call, you decide to slow and work through the twisties at a slower pace.

What’s going on? What are you doing wrong?

For starters, one thing you did right was to slow down in the twisties rather than to keep forcing your bike through the curves. You should never ride at a pace faster than you can handle – let your comfort level be your guide.

That said, what’s likely lacking in both situations is a good understanding of the concept of countersteering. But don’t feel too bad. This counterintuitive riding principle can sometimes trip up even very experienced riders.

Simply put, the term ‘countersteering’ refers to the principle (governed by the laws of physics!) that to turn a moving motorcycle in a given direction, the rider must turn the handlebar in the opposite direction of the turn.

Sound wrong? To a lot of riders, it feels wrong. But anyone who has ever successfully ridden a bicycle or motorcycle has used countersteering – whether they realized it or not. (NOTE: This principle applies only to two-wheeled, single-track vehicles, not trikes or motorcycles equipped with a sidecar.)

Putting the countersteering technique into practice

The primary application of the countersteering principle is this: to initiate a turn on your motorcycle, push forward on the handlebar on the side corresponding to the direction you want to turn.

In other words, turn the handlebar in the opposite direction of your turn. Now forget that you just read that! It can be confusing to think of it that way. Instead, concentrate on the ‘push forward’ part. Think of pushing the handlebar in the direction you want it to go, which creates a visual picture that feels more intuitive, and a mantra that’s easy to remember:

In practice, what that forward push does is initiate a lean in the direction you want to turn – and the lean then makes the motorcycle turn. Straightening the motorcycle uses the same principle in reverse: push forward in the opposite direction of the turn. Rolling on the throttle will also help bring the bike out of the lean into an upright position.

The vast majority of the time, even if you’ve never heard of countersteering, you do all of this without thinking. Your body knows the principle even if your brain doesn’t quite grasp it, enabling you to get around on two wheels without much trouble. But in certain situations, such as those described back at the beginning of this article, it can be beneficial to have a clearer understanding of the principles involved.

Countersteering on a crowded highway

In the first illustration, the problem is caused by stress. You suddenly find yourself in a scary situation and a bit of panic sets in. As a result, instead of your body doing instinctively what it already knows, your brain tries to take over. “Turn away!” it tells you. It then tells your arms to turn the handlebar away from the truck – which we now know will move your motorcycle closer to it.

Countersteering on a winding country road

If you can’t enjoy winding roads because you have trouble making your bike do what you want it to, chances are it’s because you’re not countersteering properly. It’s very common – many incidents are caused by ‘not making the turn’ and drifting off the side of the road. So good technique is about enjoyment, control and safety.

It’s simple, really – so simple you might want to kick yourself for not realizing it sooner: push left, go left; push right, go right. Instead of fighting against those curves by trying to muscle your way through them, go with the flow! Let those natural forces of physics work in your favor by pushing the handlebar into the turn.

Countersteering through the Harley-Davidson® Riding Academy

Not ready to practice on your own? The Harley-Davidson® Riding Academy is a great place for motorcycle riders—both new and experienced— to learn how to better control their bikes through countersteering, body positioning and braking.

It could be that you are a new rider who just doesn't feel secure on their motorcycle, or maybe you've been riding for some time and have not had the chance to take formal riding classes.

Whatever the case, you are always welcome at the Academy and with locations across the U.S. you’re likely to find one nearby.

The bottom line on motorcycle countersteering

Relax your body and your mind. Put these principles into practice. Give a gentle push and lean into the turn naturally. Don’t force it. You may be pleasantly surprised at how easy it becomes to make your bike do your bidding.

A nice by-product of proper countersteering technique is how much less effort is required to steer even a large motorcycle like a Harley-Davidson® touring model. Gaining this knowledge can be a real breakthrough moment for smaller riders who might think they’re incapable of safely handling a large motorcycle, such as a Fat Boy® or Touring model.

Of course, a larger discussion of proper turning technique is merited to fully (and safely) enjoy those winding roads. But understanding the principles of countersteering will help you turn the corner – pun intended! – on becoming a rider who’s prepared for any situation and gets the most from every ride. 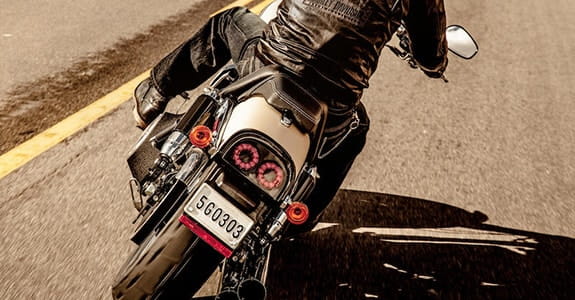