The Sturgis Motorcycle Rally is one of the world’s top destinations for motorcycle enthusiasts. After 80 years, organizers have attendance down to a science and the event’s reputation provides a road map to having the best time while you’re in town. So, you should be able to get your bike and gear to Sturgis no problem and tap into the same reliable good times that have been entertaining participants for nearly a century.

What is the History of the Sturgis Motorcycle Rally?

Clarence "Pappy" Hoel bought an Indian motorcycle franchise in 1936 and formed the Jackpine Gypsies MotorCycle Club soon after. Two years later, the club had the first Sturgis Rally on August 14, 1938. To this day, the club owns and maintains the tracks, hillclimb, and fields where Sturgis is held.

The rally's first ever event was a single race called the "Black Hills Classic". Just nine riders participated in front of a small audience. Originally a platform for racing and stunts, by 1961 Sturgis included Hillclimb and Motocross races. That's when intentional board wall crashes, ramp jumps, and head on collisions with cars also came into the mix. In 1982, Jerry Lee Lewis became the first musician to perform at Sturgis. Since then, concerts have become a Sturgis staple.

When is the Sturgis Motorcycle Rally?

In 2015, the city of Sturgis proclaimed that the Rally's start date will be Friday before the first full week of August and end on the second Sunday. In 2016, the city council even passed a resolution that said the Rally would start the first Friday of August! With the dates set in stone, the city and all the participants can gear up for an event that usually attracts 500,000 people yearly while generating $800 million in revenue!

Where is Sturgis Motorcycle Rally?

Sturgis is a small town in South Dakota. Its population was measured as only 6,627 in the 2010 census! Although Sturgis is the epicenter of the Rally, the entire state of South Dakota experiences an economic boost thanks to the hundreds of thousands of attendees, as well as all the businesses that come to service the Rally.

Are helmets required in South Dakota or neighboring states?

Harley-Davidson recommends that you always wear a helmet, but in South Dakota, motorcycle helmets are required only for riders under the age of 18. After that, all helmets are off! Or on, it's up to you. Meanwhile, neighboring states have different laws. In North Dakota, Minnesota, Wyoming, and Montana, riders under 18 years of age have to wear helmets. In Nebraska, all riders have to wear helmets. While in Iowa no one has to wear a helmet at all.

What are the Speed Limits in South Dakota?

Scenic highways, meanwhile, have reduced speeds because of all the bridges, curves, and at times limited visibility. In urban areas, speed limits are less. If you're driving through city streets, for example, the speed limit is 25 MPH. School zones and obstructed intersections, meanwhile, are 15 MPH.

When should I come, and how long should I stay?

When you come and for how long depends on how long you can put your life on hold to attend, how long you can afford to attend, and what you want out of your trip. There’s so much to do and fear of missing out may compel you to stay the whole time, but don’t forget to leave room for some of the rides you can take far beyond Sturgis.

How Much Does Sturgis Motorcycle Rally Cost?

If you're going to be at the Buffalo Chip. then a full festival pass ranges from $265.00 to $365.00 depending on when you buy your pass and how much of the rally you want to attend.

Expect to pay at least $15 to $30 per day on food since it's mostly going to be food from diners, bars, or stands.  Alcohol, meanwhile, will run you around $7 per beer plus tip.

Sturgis isn't really kid friendly, but it can be if you want it to be. For a family friendly version of the Rally, you'll want to avoid nighttime activities when things tend to get wild. You'll also want to steer clear of hotels that host a lot of attendees because rally-goers frequently like to party late into the night. Even a campground with a lot of motorcycles can keep you and your kids up if there's revving late into the night.

What Should I Wear at Sturgis?

Make sure you bring appropriate riding gear. Otherwise, what you wear is going to depend on the weather and you won't know that until the rally approaches. Either way, don’t forget the sunscreen!

What Should I Pack?

Be minimalist in your packing. That way you have room for souvenirs! You can even buy items of clothing at the rally that you wear during the rally, saving further space. Prioritize rain gear and shower supplies. And don’t forget your motorcycle insurance information!

What is the Weather During the Sturgis Motorcycle Rally?

Check the weather regularly as your trip date approaches. Some years the rally has been hot while others it was cold. Knowing what to wear can make a big difference. Although, you can always buy weather appropriate souvenirs!

What are the Best Rides During Sturgis?

Come for the rally but stay for the rides. Sturgis wouldn’t be Sturgis if it wasn’t surrounded by legendary roadways to satisfy your lust for life!

It’s only an hour to Mt. Rushmore from Sturgis, so make the time to go! What you’ve seen in films and in photos pales in comparison to seeing the monument in real life. As you approach it during your ride, you’ll start to see the mountain in bits and pieces, excitement building the closer you get. But even that won’t adequately prepare you for what it’s like to see Mt. Rushmore in person. It truly is awe inspiring!

Iron Mountain Road is part of the Peter Norbeck National Scenic Byway, US 16A. The ride begins between Keystone and Mt Rushmore and ends just east of Custer State Park Wildlife Loop. You’ll want to make the time for this ride as well because nothing compares to seeing America’s natural beauty in person.

Accessed off I-90 exits 12 or 14, Spearfish Canyon is 22 miles of scenic, curves sure to leave a lasting impression!

The 17- mile long Vanocker Canyon has the reputation as one of the most exciting rides to take in the Black Hills. Twists, turns, and a downhill plunge five miles in.

What Are Some Other Sturgis Highlights?

Check out the Pappy Hoel campground. Open daily from 9am to 7pm. Pappy Hoel will also be offering pinstriping, tattoos, and selling commemorative merch.

Jack Daniels and the city of Sturgis present their Annual Sturgis Mayor's Ride. You'll go on a ride through the Black Hills led by Sturgis Mayor Carstensen along with the Rally’s Grand Marshal. You'll swing by Mount Rushmore, and then have lunch with and enjoy a presentation from Mayor Carstensen.

You'll receive a special souvenir pack that includes a limited-edition decanter signed by the Mayor, a Challenge Coin, and other goodies provided by the Rally's Sponsors. All proceeds will benefit local emergency services! Act quickly because this is a good time for a good cause and spaces are limited to 150 participants!

Where Should I Stay During the Sturgis Bike Rally?

There's plenty of places to stay while at Sturgis, but The Legendary Sturgis Buffalo Chip® arguably offers the most authentic rally experience. The venue held its first party in 1982, and since then has been attracting riders from around the world. At the Buffalo Chip you get everything from 5 performance stages and free pancake breakfasts to 24/7 gas station and an actual zipline over the amphitheater. It's like someone decided to go all out TWICE!

Staying at a Campground?

Private bus services will transport you from most of the campgrounds in the area. You can even buy discounted wristbands or pay in person as needed. If you're staying at Buffalo Chip, you can reserve an EZ Camp Package. That way your campsite will be ready to go as soon as you arrive!

How can I get my gear to Sturgis?

Don't want to ride with all your gear? Don't! Send it using UPS, and for a $15 fee the Spearfish UPS Store will bring your gear to Sturgis Buffalo Chip! Just make sure to call the UPS store in advance. Call (605) 717-8771 or email store5137@theupsstore.com to make arrangements. Make sure to time things out right so that you get to the Rally just as your gear does. It's recommended that your packages get there by July 31st at the latest. You'll be able to collect your gear between 8AM and 5PM.

How can I get my bike to Sturgis?

If for whatever reason you don't want to ride to Sturgis, there are many ways to ship your bike and gear. Make sure to research in advance because some services only ship from particular regions.

Where Should I Park During Sturgis?

There's free parking on the East end of the Buffalo Chip. During the rally, parking will be limited. As a result, parking violations will be strictly enforced. Not only that, but there's no parking on Main Street or its side streets between 2AM and 6AM due to street cleaning. Make sure to take proper precautions to ensure that your bike isn’t stolen. Yet another reason to bring your motorcycle insurance information since a failed attempt at theft can damage your bike.

Where are the best Biker Bars and Food?

The internet is full of lists of the top biker food spots in Sturgis. And Yelp and TripAdvisor both offer plenty of reviews.

The Full Throttle Saloon has a reputation as being a must-see for any rally attendee. The Dungeon Bar and Loud American Roadhouse also get their fair share of visitors while The Knuckle Saloon, Jambonz Grill & Pub, the Loud American RoadHouse, and One-Eyed Jack's Saloon have all earned high marks from top review sites.

What are Additional Helpful Resources? 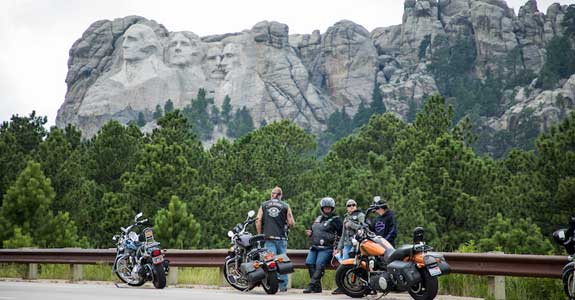