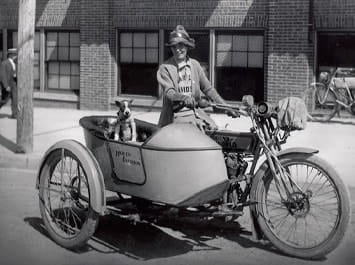 At a time when even the hardiest of men would think twice about making a cross-country trip over nearly impassible roadways, a young woman was about to show them how it’s done.

Della Crewe, a native of Racine, Wis., was an experienced traveler, having explored almost all of North America, including Alaska, as well as having visited Panama. Her decision to try motorcycle travel came from a suggestion by her nephew during a visit to her hometown.

After Della had remarked on the number of motorcycles she had observed, her nephew suggested that a motorcycle would be a great way for her to travel and see the sights.

Della had initially purchased a two-speed single for her adventure, but Mother Nature had other ideas and sent rains that washed out virtually all avenues of exit from Waco, Texas, where Della had settled. Her friends urged her to have her bike shipped outside of the destroyed area, but she insisted that she was going to start her travels from Waco and that she planned to “make every mile a Harley-Davidson mile.”

While waiting for the roads and bridges to be restored, Della became interested in the sidecar thinking that it would be a great asset in her travels. So she traded in her two-speed single for a two-speed twin with sidecar.

On June 24, 1914, Della, with 200 pounds of supplies loaded in her sidecar, set out for what would be a 5,378 mile trip from Waco, Texas to New York City with side trips interwoven into her itinerary. As a parting gift the people of Waco presented Della with a thoroughbred Boston Bull Terrier pup. Della named her new companion “Trouble” and stated, “Trouble is the only trouble I will have with me on this trip.”

Della’s first stop was the July 3rd motorcycle races in Dodge City, Kan. This added 300 miles to her route to Milwaukee. Maneuvering through muddy, badly rutted roads, which included a four mile detour through wheat fields, Della reached the races and garnered the admiration of all who attended. This trip of 973 miles was just the beginning.

From Dodge City, Della traveled through several cities making her way to St. Louis, Mo., for the annual convention of the Federation of American Motorcyclists, the predecessor of the American Motorcycle Association.

Della then made her way to Chicago, where she was greeted by C. H. Lang, Harley-Davidson’s first dealer. On her way to Milwaukee, Della Crewe was accompanied by a Mr. R. F. Rogers of Ravenswood, Ill. where she noted, “When I arrived in Milwaukee, I had passed through six states and my expenses had not exceeded $25.” By this time she had also logged 2,147 miles.

While in Milwaukee, Della was treated to a picnic held at Castalia Spring in the upper Menominee Valley, arranged by the stenographers employed at the Harley-Davidson offices.

After leaving Milwaukee, Della traveled south back through Chicago into Indiana where, it has been reported, Della was stopped not once but twice because of Trouble. Indiana was under quarantine for hoof and mouth disease in 1914 and it had been reported that Della had to promise authorities that Trouble would not leave that sidecar until they were safely out of Indiana (although Della mentions nothing about this in her personal account of her travels published in The Harley-Davidson Dealer).

The Endurance Trip Comes to an End

Della spent the summer and fall months of 1914 traveling from Waco to Milwaukee. As a result, she found herself battling below zero weather and snow-covered roads. She reports one instance where she was able to cover only 2.5 miles in two hours.

Della and Trouble arrived in New York City in December 1914, she reportedly wearing four coats, four pairs of stockings, and heavy sheepskin shoes and Trouble in his specially made-to-order sweater. She had traveled 5,378 miles and covered ten states over a span of six months.

Upon her arrival in New York, Della stated, “I had a glorious trip, I am in perfect health and my desire is stronger than ever to keep going.”

Della had originally planned to sail to Europe and travel through that continent, but because of the ongoing war, she altered her plans and a few days following her arrival to New York, Della and Trouble and her 1914 Harley-Davidson Twin sailed to Jacksonville, Fla. with plans to travel through the southern portion of the United States, Cuba and South America. 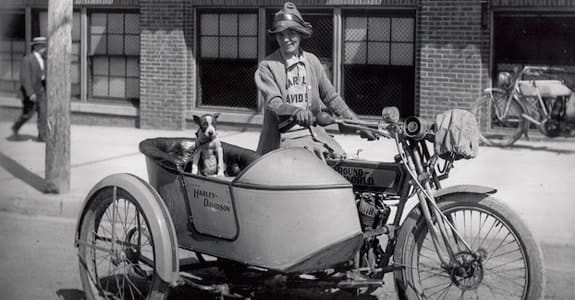