The Polar Bear Motorcycle Grand Tour is a Different Breed 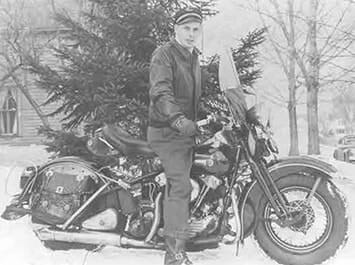 When most of us are hooking up our battery tenders, the Polar Bear Motorcycle Grand Tour is gearing up for the first ride of the season. The Polar Bears have been braving the cold to beat the winter blues since the late 1970s, but they almost never came to pass. Bob Hartpence, founder of the Polar Bear Grand Tour AMA DISTRICT II, tells the story of their origin.

The Start of the Polar Bear Grand Tour

“The plan was for bikers who wanted to keep riding through the winter to ride from their various locations across the East Coast and to meet at a restaurant for lunch, but we couldn’t find a restaurant to host us,” said Bob. “One time when we were trying to park in a restaurant’s parking lot, the owner starting yelling about his restaurant being a family business and saying we weren’t welcome.

“We were a bunch of doctors and bankers, many of whom had served in the military,” chuckles Bob. “The group was a way for us to keep riding in the winter, but to also re-experience the camaraderie of the military life. Back then we didn’t have email, so we met at the VFW. And we broke up into two flights, so the group didn’t get so big that it was unwieldy.”

Soon enough, they found restaurant owners who welcomed them, and they’ve been riding through the winter ever since, swelling from 50 to over 500 riders at any given time.

“If it’s snowing, we don’t ride, but every now and again you get caught in treacherous conditions,” said John Bachota*, Polar Bear Grand Tour Flight A Leader, “You just keep a cool head and a slow pace and remember that tires and roads don’t give like they do in the summer, so no leaning into turns.”

Bob and his fellow Polar Bears contend there are many advantages to riding in the winter.

“You don’t have to spend the money to store your bike,” Bob says.

He laughs about how motorcycle magazines are always telling riders how to store their bikes for the winter. As a joke, one year he wrote an article about how to store your bike in the summer. “Sometimes you can’t get cool enough in the summer, but you can always layer up to dress for the cold,” according to Bob.

That’s not a battery tender you see on a Polar Bear’s bike. It’s a heating source that Polar Bears plug all sorts of products into to stay toasty. Everything can heat up nowadays.  Heated clothes. Heated handle grips. Heated seats. Harley-Davidson sells it all.  John swears by his helmet liner, which he contends is all he needs to maintain body heat in the critical head area, because if your head is cold, you’re going to be miserable.

But, the Polar Bears are anything but miserable. Besides the bonds they’ve built over the decades, members enjoy a generous reward system. You get points and patches and pins for everything from showing up on a Sunday, to perfect attendance through the season, to how many miles it took you to make it to the destination.

“We would rather be riding the open road than surfing the couch during the winter months,” said Bob. “And, when the summer rolls back around, I’m ready to ride. Winter riding makes me a more consistently skilled rider.”

How to Join the Polar Bear pack?

According to Bob, winter riding is the best-kept secret in the motorcycle business.

If you want to join the Polar Bear pack, the group meets every Sunday, beginning with the first Sunday in October. Check out their website for the schedule.