The Harley-Davidson That Rode the Japan Tsunami 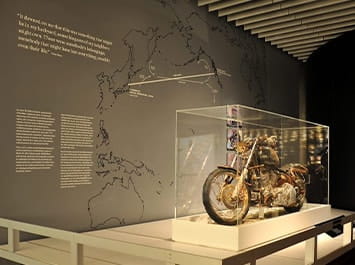 March 11 marks a heartbreaking anniversary for many people around the world.

It was on this day in 2011 that the devastating Tōhoku earthquake and tsunami struck Japan, taking thousands of lives, causing extensive damage, and leaving hundreds of thousands homeless. This year, 2021, marks the 10-year anniversary of this tragic event.

In the year following the tsunami, a Harley-Davidson® motorcycle was found on the coast of British Columbia, Canada after drifting 4,000 miles across the Pacific Ocean. The story of how this 2004 FXSTB Softail® Night Train® motorcycle was washed away, found, and recovered has been featured in a display at the Harley-Davidson Museum since 2012.

It serves as a reminder of the international impact of the event and as a memorial to the more than 20,000 lives lost in the disaster.

Before the wave struck Japan, a Harley-Davidson rider had placed his motorcycle in storage inside a trailer. When a wall of water overtook his town, he lost not only his home, but several members of his family. The container with his motorcycle was only one small part of an estimated 20-million tons of debris that the influx of water swept out to sea.

Kept afloat by foam-insulated walls, the trailer safeguarded its contents as it was pulled by currents across the Pacific Ocean. Eventually landing on a remote island off the coast of Canada, the trailer and its contents were discovered more than a year after the tsunami by Canadian beachcomber, Peter Mark.

On April 18, 2012, Mark was on the isolated shoreline of Graham Island, part of a group of sparsely populated islands off the coast of British Columbia.

He spotted the large trailer box that had washed ashore and, to Mark’s surprise, a battered yet recognizable Harley-Davidson motorcycle lay inside. The bike’s license plate revealed its Japanese origin. Having no way to remove the bike from the beach, Mark captured video and a few photos with his phone before leaving.

With support from Steve Drane, the Harley-Davidson® dealer in Victoria, British Columbia, Mark returned to the beach to retrieve the bike in early May. In the weeks that had passed, the tide had taken the container back out to sea, but the bike was left behind, partially buried in the sand and defenseless against the destructive forces of wind, salt and sea.

Search for the tsunami bike’s owner

Mark’s discovery of the motorcycle made international headlines. As the story of the find spread, so did interest in finding out the fate of its owner. Working with news agencies and representatives from Deeley Harley-Davidson Canada and Harley-Davidson Japan, the license plate was traced, and, miraculously, the owner was located and contacted.

The Motor Company offered to return the bike to the 29-year-old rider. Still struggling to rebuild his life in the aftermath of the disaster, he declined. Although grateful for the offer to repatriate his motorcycle and touched by the outpouring of support from Harley® riders around the world, he requested that the bike be placed at the Harley-Davidson Museum in honor of those whose lives were lost or forever altered by the disaster.

The current condition of the tsunami bike

The bike has not been cleaned or restored since it was found on the beach on Graham Island. While exposed to the elements, it began to deteriorate rapidly.

Metals like steel and aluminum, along with rubber, plastics and leather, are damaged in the presence of moisture, oxygen, and salt. When the motorcycle was washed out of the trailer and onto the beach, its decay accelerated. Laying on its side, the bike was pounded with water and dragged over sand and rocks by the tide. The resulting scratches breached the bike’s finishes—the paint and chrome plating--leaving the metal parts vulnerable to corrosion from the saltwater.

Due to the salt and sand that remain on the bike, corrosion continues to this day. Cleaning or restoration would erase the evidence of what this machine has endured, and the motorcycle would no longer serve as testament to the ongoing tragedy of the tsunami.

A memorial for lives lost and recovery

Displayed as a memorial to those who lost their lives, the motorcycle has been left untouched as a reminder of the catastrophe, but also of the chance occurrences that have connected many individuals across a vast ocean.

On display alongside the motorcycle are one thousand origami cranes. Folded in 2013 by members of the Minami Osaka H.O.G.® Chapter of Sakai, Japan, the thousand paper cranes are known as Senbazuru. They were made, and are displayed, as a gesture of peace, support, and recovery for the victims of the tsunami. 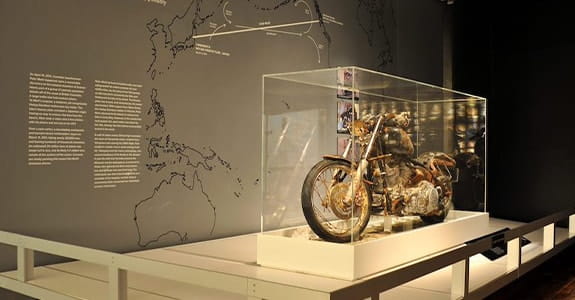