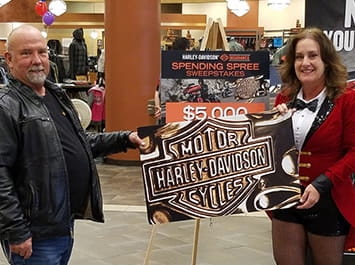 This past summer Harley-Davidson Insurance made it rain. Money that is.

Through the H-D Insurance Spending Spree Sweepstakes that lasted from March to August, customers who requested a quote for Harley-Davidson’s affordable motorcycle insurance were entered into a drawing to win a $5,000 Harley-Davidson® gift card. Each time a customer won, the dealer won as well—so the race was on for dealers to lead customers to the contest.

Dealerships Putting the Winnings to Work

While H-D customers mostly used the money to customize their rides, dealers across the country put their winnings to work by hosting events for customers to drive sales, promote other businesses, and raise money for charity.

For example, Bud's Harley-Davidson® in Evansville, IN, used their prize to host their first-ever Customer Appreciation Carnival, which was held on Saturday, October 20. The day was filled with all sorts of fun—including 20 percent off licensed products and carnival games in every department.

“We had double the number of invoices and twice as many over-the-counter sales than what we’d see on a typical summer Saturday,” said Bud’s marketing manager Aerika L. Wardrip. “We averaged 800 to 1,000 people in the store, with plenty of new faces and families. We also sold four motorcycles—thanks to the Used Bike Extravaganza happening in the parking lot during the Customer Appreciation Carnival.”

Promoting Other Businesses and Non-Profits

The dealer also took advantage of the day to help promote other businesses and non-profits in their neck of the woods. The dealer invited The Parlour Barbershop and Salon to give haircuts all day, as well as provide beard trims.

“They were busy with customers in their chairs from start to finish,” said Wardrip.

It Takes A Village, a local, non-profit animal rescue center, raised awareness and donations with a puppy kissing booth during the time they were at Bud's. And Harley-Davidson Insurance was on site to answer any questions Bud’s customers had.

While it was too windy for the bouncy house, the dealership’s River City H.O.G.® Chapter Members volunteered to man the games and prepare the food.

“It was truly a family affair,” said Wardrip.

You can visit Bud's Facebook page to see pictures of the event.

Congratulations to the following winning dealers:

July—Bud’s H-D® in Evansville, IN