A Fat Boy® LEGO® Motorcycle That Fits Snugly Under the Tree 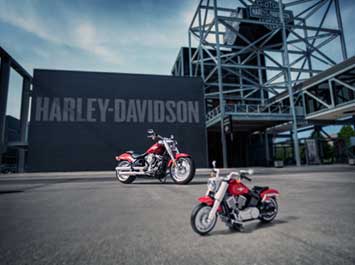 Legos are truly for children of all ages, providing entertainment that adults can enjoy as much as kids. That’s why the LEGO® movies have been such a hit.

It’s no surprise, then, that when LEGO® teamed up with Harley-Davidson, they created something for everyone. After all, a Harley-Davidson® motorcycle is the dream bike for children of all ages.

The result of this partnership is a hyper-realistic LEGO® interpretation of the Harley-Davidson® Fat Boy® motorcycle. The finished bike has a Milwaukee-Eight® engine with moving pistons, handlebars that turn, gearshift and brake levers that move, and a side stand that flips down for easy parking.

As far as the nuts and bolts are concerned:

But the finer details provide much more of the magic of the real-life machine. Below are a few additional highlights and product details that make the Harley-Davidson® Fat Boy® LEGO® motorcycle an expert creator’s dream:

The Harley-Davidson® Fat Boy® has already been met with rave reviews from fans of both LEGO® and Harley-Davidson with 94% of customers on lego.com recommending the product.

“My husband and grandchildren love it,” wrote one customer on the Harley-Davidson® page. “They spent time together putting [it] together, then playing. Perfect gift for both. Both would like another set.”

“Great fun for my Grandson and me,” wrote another Harley-Davidson customer,” All-day to assemble with the help of a 6-year-old.”

A more in-depth review comes courtesy of Jay’s Brick Blog, officially recognized as a Registered LEGO® Fan Media. “I have to commend Mike Psiaki and his team for actually pulling this set off and using what are mostly conventional LEGO® elements (as opposed to Technic) to mimic the Harley-Davidson’s shape so well,” writes Jay.

This is not faint praise from Jay, who’s been reviewing LEGO® sets online for nearly ten years.

“I was engaged throughout the build,” Jay continues, “and it kept me guessing all the way, as to how the Harley-Davidson® motorcycle would take shape, and it’s the most fun I’ve had building a LEGO® set in a while.”

How to Buy the LEGO® Harley-Davidson® Fat Boy®

While temporarily out of stock on LEGO’s official website, you can get the Fat boy® directly from Harley-Davidson® for the sale price of $64.99 for a limited time. This is less than the $99.99 the set goes for on both Amazon.com and Walmart.com.

This way, the LEGO® Creator Expert Harley-Davidson® Fat Boy® motorcycle fits snugly under your tree without making a dent in your wallet or requiring a motorcycle insurance policy. Then you can admire the bike on your mantle. 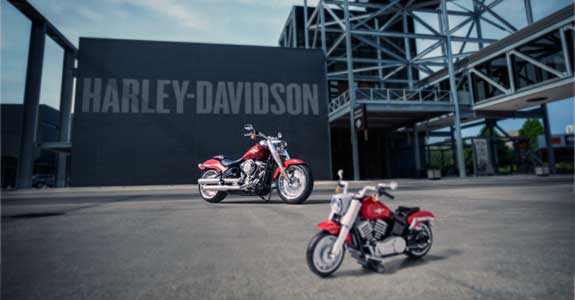