How to safely pass vehicles on a motorcycle

Overtaking is a circumstance so common to riding and driving that it might seem mundane. It’s not.

In fact, passing another motorist exposes you to some of the most significant risks and dangers of all riding situations, which is why each of us should utilize key strategies for safe passing.

First, ask yourself why you want to pass. Are you on your motorcycle because you’re trying to get somewhere or because you enjoy the ride? If it’s the latter, maybe it’s best to find that peaceful pace that flows with other motorists rather than racing past them.

In most circumstances, if you decide not to pass someone, you’ve reduced your exposure to potential danger.

Total abstinence from overtaking isn’t too likely for most riders, so let’s consider how to pass safely and effectively. That means employing this basic blueprint for every maneuver you make:

That’s the basic outline for safe passing and should be used for every overtaking maneuver. Yet, there’s a lot of nuance in the details and varying circumstances of some situations.

When overtaking another motorist, you’re faced with a decision to either roll on the throttle to build some speed, or to downshift, hit the gas and use a more sudden burst of acceleration to pass.

Which is the best?

The downshift-and-gas-it method is better because it typically carries less momentum into the situation, making it easier to abort the pass if the situation changes.

Building speed before initiating the pass consumes time. Plus, it usually means you’re going pretty fast by the time you’re swinging wide to make the pass. If conditions suddenly change – such as an oncoming vehicle or a change in speed of the vehicle you’re attempting to pass – you can be forced to take evasive action at the very moment you’re committed with maximum speed.

The solution: pass decisively and quickly, utilizing your motorcycle’s ability to accelerate.

4. Passing with a passenger

The strategy changes when overtaking while your motorcycle is loaded with a passenger or the weight of extra gear. If your bike is fully loaded, ride with the premise that you’re not going to pass unless it’s necessary. A loaded motorcycle takes more time to accelerate and decelerate.

For those occasions when you must pass while riding fully loaded, avoid the ‘gas it’ method in favor of building speed before initiating the maneuver. A fully loaded motorcycle doesn’t accelerate quickly enough.

Use the same rationale as passing unloaded: use the method that consumes the least amount of time for the whole passing process. With a loaded motorcycle, the building-speed method is generally the quickest.

A ride through rural Pennsylvania or Wisconsin can make you acutely aware of the pitfalls associated with passing slow-moving farm machinery.

Someone driving farm equipment like a tractor or combine poses added challenges and danger to a motorcyclist. This equipment is usually wide and can hang into a second lane. Sometimes operators can’t see or aren’t paying attention to motorists behind them; they might not have working lights or turn signals; their equipment is cumbersome and can sling dirt onto the road, and they might abruptly turn into fields without a marked or visible driveway.

Pay attention to these dangers for clues to directional changes a farmer might make in his/her route, such as the telltale sign of dirt chunks going into and out of fields, as well as other equipment being operated in upcoming fields.

6. Passing safely in a group

If you’re among a group of riders who are about to pass a motorist, agree in advance on how the group will or will not pass and follow that guidance while still making your own safety decisions.

It is a mistake to blindly follow the lead of the rider in front of you. For starters, that rider might have very different sensibilities than you about what constitutes a safe situation for passing. Secondly, even if the situation was safe for his or her pass, it might have changed by the time you’re ready to do so.

The best approach is to employ the same strategies and sensibilities used when riding solo. If you’re riding within a group and decide to pass a motorist, be extra cautious to look behind you before swinging wide. Others in the group behind you might not share your same caution and could decide to pass before it’s their turn.

7. How to get passed

How to handle occasions when you’re the one getting passed? It’s best to leave your ego at the door, do your scan of the situation and allow the pass to occur as safely as possible.

If you think the situation is safe and okay for passing, stay the course and don’t make any changes. But be prepared to change that tactic and have a plan for it. If you see a motorist roll out to pass, then look at all the factors on the road.

You want them to have a choice to go in front of you as well as the ability to change their decision and come in behind you. That might mean changing position in the lane to free up space and slowing down.

Here are a few more valuable tips for safe passage:

In a nutshell, be cautious, be aware and be thoughtful about your environment. And safe passage to you. 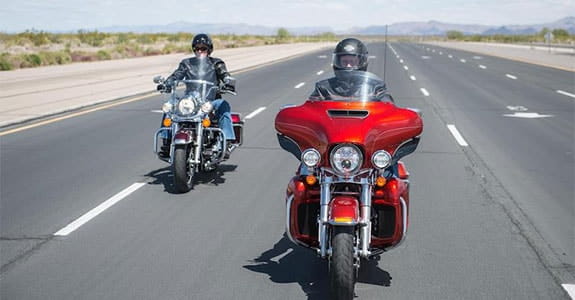