I Am Woman, Hear Me Roar My CVO™ Street Glide® Motorcycle 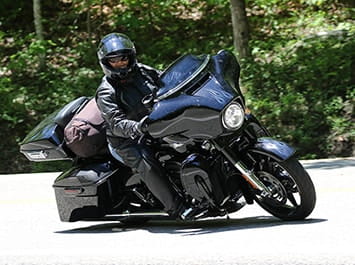 VP and Chief Information Officer of Harley-Davidson, Taren Rodabaugh, was only seven the first time she rode on a motorcycle. She remembers wrapping her tiny fingers around her dad’s big leather belt and setting off on night rides across the countryside on the back of his beater bike. The hum of the engine lulled her to sleep like a bedtime story, and from an early age she began to associate riding motorcycles with relaxation. Fast forward decades later, and she’s no longer a passenger. Now, she’s in the driver’s seat, but the motorcycle is still doing the trick to calm her mind.

As the CIO of a major corporation, a wife, and mother, Rodabaugh’s mind is constantly racing to the future with thoughts of what she needs to get done or replaying moments from the past. All she needs to do to silence her inner commentator is to fire up her Fat Boy® motorcycle. Or, maybe her CVO™ Street Glide® motorcycle. Because, as she contends, she can ride whatever bike she wants—just like any woman can.

The Benefits of Riding

For her, riding is a unique combination of effort and ease that enables her to relax—unlike other activities like exercising, watching a movie, or reading a book. After a ride, she feels mentally refreshed and her thinking is clear, creative, and calm.

“Women have a tendency to think and rethink and to be hard on themselves, more so than men,” says Rodabaugh. “Riding not only helps women clear their minds, but it gives them the confidence to feel like they can do anything they set their minds to. Women can do more than they realize. We just need to be brave and anything is possible.”

Rodabaugh’s husband was her first instructor, but she admits she didn’t truly fall in love with riding until she took the Harley-Davidson® Riding Academy course. She believes there’s something about doing it on your own terms that fully ignites the spark that’s been there all along.

She talks about how Harley-Davidson’s training provides a path to turn people’s passion for motorcycles into a practical step-by-step process for learning to ride. “They are really teaching the A, B, C’s of riding,” says Rodabaugh. “The instructors at the Harley-Davidson® Riding Academy break every single step of the process down into easily digestible pieces. You go from simply standing with the bike, to twisting the throttle, to pushing it, to riding it. Not only are the instructors encouraging, but other trainees are supportive as well.”

More and more women are riding, according to USA Today. The Motorcycle Industry Council reports motorcycle registrations reached 8.4 million in 2014. In 1998, only 8-percent of motorcycle owners were women. By 2014, female ownership increased to 14-percent. As more women enter the sport, more Harley-Davidson® dealers are offering the training. Rodabaugh recommends women who want to get started with riding make a beeline to the Harley-Davidson® class. She says the way they take you through the paces makes riding feel like second nature.

She believes once women are ready to ride and are looking to buy, they shouldn’t put limits on the type of bikes they consider. Although images in the popular media often depict women on smaller bikes, she sees women ride every type of motorcycle there is.

“I rode to work this morning and pulled up to a red light alongside another woman on a Fat Boy® motorcycle,” says Rodabaugh.

While the two were riding the same bike, they were going to opposite ends of town, becoming a kind of a metaphor for how women make the sport their own based on their individual personalities. Some women like to experience riding as a lone wolf, but others relish the camaraderie of riding in a pack. Rodabaugh advises women who are getting started to seek out mentors. She and her husband joined their local H.O.G.® chapter and she regularly rides with a group of women with a range of experiences from how long they’ve been riding to what they have going on in their lives.

Not only can women customize how they ride—whether it’s alone or in a group—but how they tweak their bikes and clothes to make them feel more confident and comfortable. Rodabaugh admits, “I’m 5’3” on a good day.” So, she’s added height to her shoes, customized her bike with reach handlebars, and switched her seat to a reach version to make her bike fit her frame.

Once you feel mentally and physically prepared to start racking up the miles, Rodabaugh urges you to get out there and try all different types of riding experiences. Ride different bikes. Ride in different conditions. Ride across different terrains. Just ride. She says her mentors told her than once you hit 5,000 miles, you reach a threshold where you start to feel like a bona fide rider.

As for Rodabaugh, she plans to ride this summer with her husband to Harley-Davidson’s 115th anniversary rally and wants to stop at Harley-Davidson® dealerships along the way. She says she feels lucky that she isn’t a “golf widow” and she and her husband can share the experience of riding together.

Thoughts on the Future of Riding

When asked about the future of riding, she says the sport is becoming more inclusive, making it more expansive over time—not only in the types of rides, but the types of riders. That riding can include hill climbing, X games, winter rides, flat track racing, and so forth. And with more women riding than ever before, it’s also crossing cultural boundaries.

Rodabaugh believes once women are on their bikes, the hum of the engine will drown out their fears and they’ll feel the freedom that comes with having peace of mind on an open road.

"Being brave opens the door to boundless possibilities,” says Rodabaugh.

The S.E.E. System and the Art of Anticipation
How Motorcycling Has Changed Throughout the Years
The Litas Women’s motorcycle community
How to countersteer a motorcycle correctly 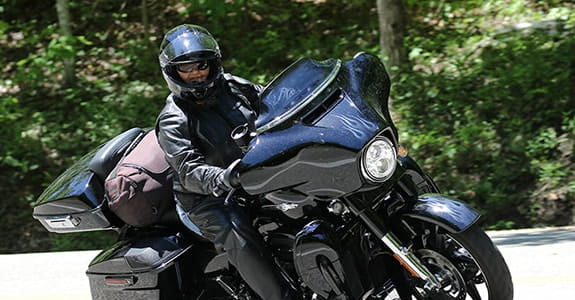