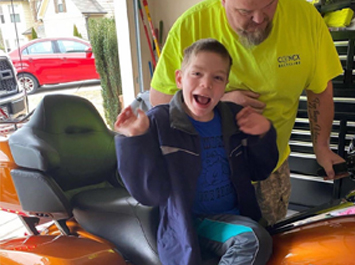 When he first got her, he would excitedly ask, "You want to see my '02 Harley?" Everyone would, of course, answer, "Yes!"

And then he'd come in with his little girl -- Harley, born in 2002, one of seven children who Daniel has adopted.

"I grew up without a father," explains Daniel, "so I always wanted to be a father to those who didn't have one." "I started fostering children, and then I adopted everyone who came into my house until the state said, 'Hey, your house is full!'"

Of Daniel’s seven adopted children, four are already grown and out of the house, but seven children still reside at home: Harley, Eli, and Logan, Daniel’s other adopted children, and Nathan, Christopher, Adam, and Rachel, his wife Kathy's four children from her previous marriage. If seven children, and two dogs, wasn't already a handful enough, of those seven, Rachel, Harley, and Logan are also children with disabilities.

"They've all been through hell," says Daniel of his three adopted children, "We're just trying to work through it with them and treat them to as normal life as they can."

The family likes to hang out at the house, play games or go to the park, with kickball being a favorite. "We have good days, and then we have just flat out awful days. It's been an adventure, but one I'd never trade." Daniel says.

Recently, Daniel had a particularly good day: he became an H-D Insurance™ Sweepstakes winner. And all he had to do to enter the contest was take 15 minutes to get an insurance quote online.

At first, Daniel thought the email telling him he won was a hoax. Then, while sitting in traffic, he decided, "They put their phone number on there, so let me call." Daniel was ecstatic, but maybe not as excited as his wife, who immediately planned a shopping trip. Daniel laughs, " I was like, hey, I won – not you!”

Daniel bought his bike in March 2020, not long before he won the contest. There was a snowstorm in Georgia, and Daniel’s daughter had to get blood work done. Afterward, the family didn't quite feel like going home, so they decided to go to Killer-Creek. They left with a used 2014 Ultra Classic.

Although he rode often when younger, Daniel estimates it was probably 20 years since he’d last ridden. That first ride after 20 years? "Scary," laughs Daniel, "I took a rider safety course. I thought, 'If I'm going to do it, I want to do it right.'" Killer-Creek threw in the rider's safety course when Daniel bought his bike.

Daniel learned how to ride from Dave, his sister's husband, who served as a role model for Daniel growing up. "He's someone who finishes everything he starts," Daniel says, "he's always willing to help; he's not a selfish person at all."

That's a lesson that Daniel has carried with him throughout his life, even recalling a time when he was finishing the basement that would one day become a bedroom for his children. "I had to hang sheetrock in the basement. And I was on the verge of giving up. But I thought, 'No, I started it, and I gotta finish it.'"

Hanging up sheetrock has caused Daniel much more of a headache than the Coronavirus pandemic, which affects him uniquely as an essential worker in the commercial recycling industry. He's noticed an uptick in recycling because people have been staying in more and he has to wear PPE to work, but otherwise, the most significant change has been less traffic to and from work.

"I enjoy the ride in the morning because there's no traffic and it's peaceful," says Daniel, "And then the ride home just helps me unwind. And it's really nice where we live - right at the foothills of the Blue Ridge Mountains.”

Building a relationship with Killer-Creek Harley-Davidson®

Daniel is also a fan of going to Killer-Creek Harley-Davidson®, which he visits at least once a month -- often enough to have become buds with some of the employees. "There's Ted, or Crazy Eyes, as they call him. I can't remember Stumpy's real name." Daniel laughs, "That's the only problem: everyone has nicknames, and I don't know their real names."

Any time Daniel visits a new area, he tries to check out the local Harley store. He's hoping to get a shirt from as many stores as possible, although he only has two: one from Wisconsin where his wife's family lives and one from Killer-Creek.

No matter how many shirts Daniel may one day collect, Killer-Creek will always have a special place in his heart. "They immediately welcomed me to the family when I bought my bike. They're great every time we're there. They treat our kids like gold, and they treat us like gold. They've got a customer for life out of me!"

If there's something Daniel knows, it's making people feel like they're a part of a family, which means that if Killer-Creek can do the same for him, then they're doing something right for sure.