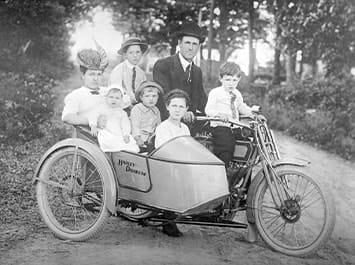 Harley-Davidson would ultimately play an essential role in the careers of five of the seven family members pictured—the four boys and their father—starting with a dealership in Orland, Indiana.

Over the years, The Dealer and The Enthusiast™ (the Motor Company’s rider-focused magazine since 1916) published many stories about the Rathbuns and their family ties to Harley-Davidson. Individual family members, too, appeared in everything from Service School updates to club reports and event recaps.

Using these articles, other dealer records, and local newspapers, the Harley-Davidson Archives pieced together this brief history of a family with a lifelong passion for motorcycling and the communities it creates.

This photo originally ran in the August 1914 issue of The Harley-Davidson Dealer, the company’s magazine for dealers published from 1912-1916. It accompanied a story about Bruce J. Rathbun, a rural mail carrier who wrote to the Motor Company to share how his Harley-Davidson® motorcycle improved the speed and efficiency of his work.

“During the week he uses the outfit on his route and when not so used it serves as a carryall for Mrs. Rathbun and their five children,” reported The Dealer. Bruce, piloting the motorcycle in the photo, is flanked by his older sons, Glenn at the handlebars and Harley at the back. His wife, Myrtle, anchors the sidecar holding the baby, Lawrence Nelson, with son Raymond and daughter Maude in front.

Bruce Rathbun loved his motorcycle so much that he became a Harley-Davidson® dealer while continuing to work as a mail carrier in Indiana. After about 10 years, the family relocated to West Palm Beach, Florida where they opened Bruce J Rathbun & Sons. In just a couple years they experienced a real estate boom and dramatic bust, followed by a devastating hurricane.

Unable to continue in Florida, Bruce jumped at the opportunity to fill a dealership opening in Orange County, California. In October 1928, Bruce opened Rathbun’s Motorcycle Co., in Santa Ana, which he ran until 1939 when he sold it and retired to farm.

When his father became a dealer, Harley Rathbun got hooked and started working in the shop after school and on weekends. Shortly after the family arrived in Santa Ana, Harley established his own business, Rathbun’s Motorcycle Co. in San Bernardino. He sold the dealership in 1941, when he left to join the war effort as an instructor in H-D’s quartermaster school.

In 1945, Harley returned to California, where he worked for other H-D® dealers until he resurrected Rathbun Motorcycle Co., opening a dealership in Porterville in 1948. Many riders in the area were drafted in the Korean War, and Harley closed the shop in 1951 and transferred to Pomona, where he ran a successful dealership until 1965. He also served as president of the H-D Dealer Association of Southern California.

Of all the Rathbuns, Harley likely had the biggest impact on riders. During his lifetime, he started four motorcycle clubs, supported local racing events, and hosted numerous tours from his dealerships. One of his biggest impacts was helping establish the Death Valley Run—part enduro, part road run, part gypsy tour—in 1955. It was a popular event that brought motorcyclists from across the country and continued for at least 14 tours.

Harley’s righthand through it all was his wife, Bea. “Mrs. Harley Rathbun is an expert motorcyclist, both solo and sidecar. She is also a good motorcycle saleswoman,” said the February 1934 issue of The Enthusiast™ magazine. In fact, Bea took over running the Pomona dealership for a brief time after Harley retired.

In addition to her work supporting the dealerships, Bea was a champion of motorcycle events, organizing the gypsy tour portion of the first Death Valley Run and planning and participating in several of the Slow Poke Motorcycle Club events. She was also an active member of the Motor Maids.

Glenn Rathbun competed his first enduro at age 16, competing as a novice in hill climbs at least two years prior to that. Competitions were a lifelong passion for Glenn, who helped organize and officiate motorcycle events in his later years.

Glenn worked as a salesman and mechanic in the family’s Santa Ana and San Bernardino locations until he joined the war effort as a civilian instructor of motorcycle mechanics.

After the war, Glenn moved to Georgia, where he worked for local Harley-Davidson® dealers for a few years until he transitioned to the Motor Company in the early 1950s—eventually becoming a southeastern district manager where he was a well-known figure at events like Daytona.

It is uncertain when he stopped working for the Motor Company, but he was employed at least into the late 1960s and died in the early 1980s.

The two younger brothers, Raymond and Nelson (his first name Lawrence, but he went by his middle name) cut their chops as salesmen and mechanics in the family’s Santa Ana and San Bernardino shops.

Like their brothers, they enlisted in World War II. Afterwards, they both went on to run their own motorcycle sales and service businesses, for other manufacturers, in Texas.  Harley inspired the next generation, too: Raymond's son Bruce, worked for Harley-Davidson for 30 years including a role as a district manager in the southwestern U.S. 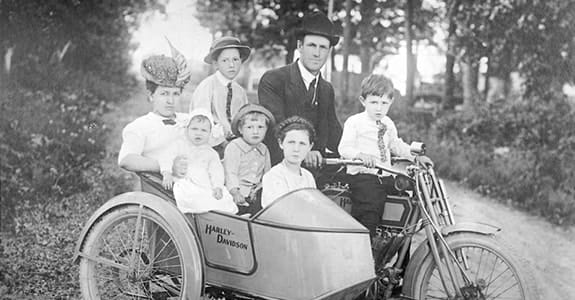